The ‘OPEN’. One of the most important and enjoyable weekends in Boughton’s short mat calendar.

Sponsored by Barratts Honda of Canterbury and spread over two days, the competition took place on 4th and 5th of January at Boughton Village hall and comprised doubles on Saturday and triples on Sunday.

The members at Boughton pulled out all the stops to welcome the competitors, and the catering team and their helpers put on delicious lunches as well as providing teas, coffees and a range of cakes and biscuits to keep everyone going throughout the weekend.

The winners of the doubles on Saturday were Boughton’s own Bob Holliday and Karen Gentry. The first time Boughton have won the competition for over fourteen years. Congratulations and well done to them. The runners up were David and Barbara French from Harrietsham.

On Sunday the winners of the triples were Pat Lane, Charles Maxted and Chris Lane from Whitstable with runners up Bob Brisley, Maggie and David Marshall from Lyminge. The prizes were presented by Paul from Barratts Honda in Canterbury who were the main sponsors of the weekend.

Many thanks to all the organisers and helpers who put in so much time to ensure this important day was such a success. 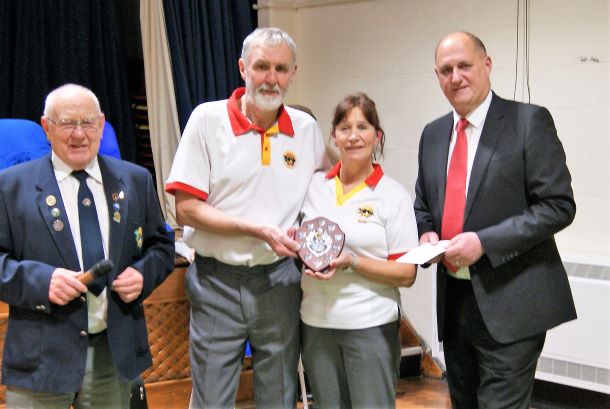