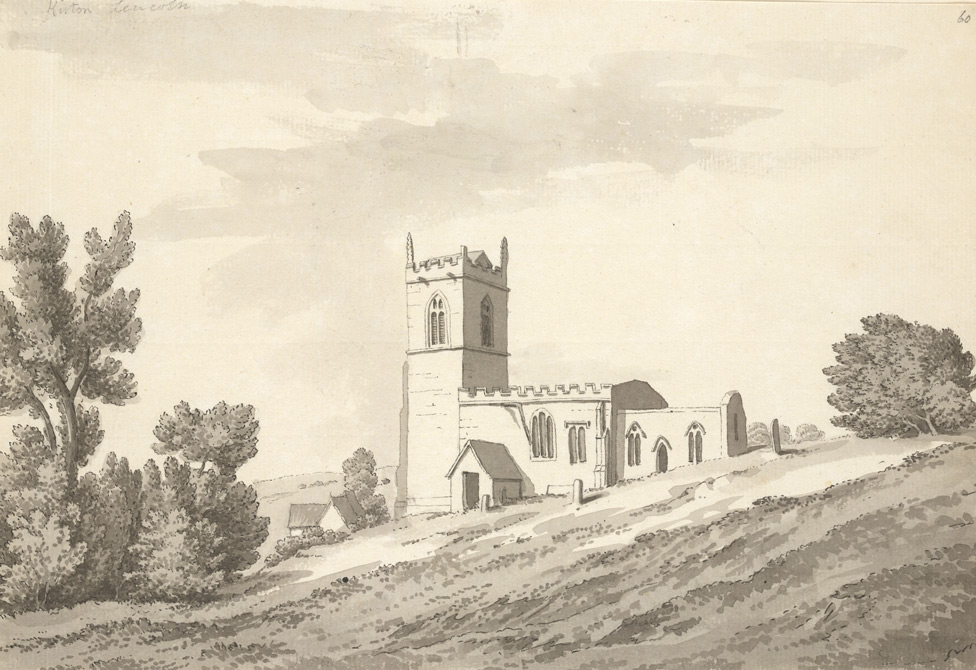 A Brief History of;   ' THE MOST HOLY TRINITY CHURCH'  KIRTON.    (Church of England)

Anyone travelling through Kirton, cannot help but notice the beautiful village church.  Set high up
on a sandstone cliff, at the northern end of the village, it occupies a commanding position,
overlooking  farms, houses and ﬁelds.  It can be seen for miles around, and is a stunning sight,
even at night, when its illuminated structure shines out for miles around.

There is no mention of a Church at Kirton in the Domesday Book of 1066.  That does not mean
that there wasn't one, but that it was too insigniﬁcant to be taxed.  The Anglo-Saxon dwelling
name, 'Circheton', and later, the Danish, (Viking) 'Kirkton', indicates that there was a church of
some sort here as far back as the 6th-7th centuries.

Much of the building as we see it today, is Early English architecture and dates back to the 13th
century.  The  majestic Norman arcade, one of the ﬁnest in the county, shows, highly developed
nailhead decorations, which enrich the three pointed arches, and a special feature is the stone
seating round the columns, quite common in Nottinghamshire, but rare elsewhere.

The Tower dates from about 1425, and is 'Perpendicular', made from large, ashlar blocks of
Ancaster stone.

The church originally housed three bells, but in 1843, one of these was stolen by thieves, and in
1887, to commemorate Queen Victoria's Jubilee, the others were replaced by a set of eight
Harrington tubular bells, costing £70.  Also, at the same time, a two dialled clock, marked 'George
Goodall, Tadcaster, 1802',  was purchased from Bradford Town Hall.  This still shows the time of
day to villagers now -  as long as it is wound on a weekly basis !

The Church was 'disastrously' restored in 1865, by the Victorians. Much renovation was attempted,
but sadly, many original antiquities were destroyed in the process!  However, during the
excavations of 1865, fragments of 15th century  coloured glass were found in the churchyard.
These were rescued and can be seen in the window near the font.  They form a beautiful little
picture of a hart posed on the banks of a stream.

The Lych-Gate and the 5 ﬂights of steps and boundary walls were erected in 1875, by a former
Rector, the Rev C T Lawson.  He also planted the trees on the banking. Before this time, the
entrance to the Church was at the top of the hill by Littlemoor farm, and came down from the top of
the churchyard.

Kirton Church has had many Patrons in its time, and, in 1913, it was passed from the Patronage of
the Duke of Newcastle, (of Clumber Park),  to the 'Society for the Maintenance of the Faith', who
have it still.

Rev Chris Levy became Rector of this Parish in 1995, and retired in July, 2016. During his time
here, he was extremely active in acquiring a Lottery grant from English Heritage, and in
supervising and implementing the subsequent works needed, to make the Church structurally
sound. This work took years to complete, and the Parish must be grateful to him for all his work,

encouragement and support.  The Church is now watertight, and looking good, but, as anyone who
owns old property knows, there is always work to be done !

The current PCC would like to lay on piped water, so that a toilet and kitchen could be installed.
We always make coffee and tea after the morning service, but the water has to be carried into
Church in containers.  Also, water is required for arranging ﬂowers etc.

The Churchyard is not the easiest terrain to keep under control, but thanks must go to Geoff
Harwood, who for years, has mown the grass and kept it all looking fabulous.  This work is
voluntary, a labour of love, and the whole Parish is grateful for his commitment. Thanks too, to
Jonathan Price, who gives him a hand nowadays, and contributes the petrol !

The Church welcomes everybody without exception, and newcomers will ﬁnd a very friendly
atmosphere.  There is no doubt that the Church is loved and cherished.  When there was talk of
possible closure, due to ﬁnancial problems, there was an outcry from Parishioners.  Consequently,
many now support a Gifting Campaign, to aid its maintenance.  The PCC is grateful for the
continued support, whether monetary or otherwise.  It is wonderful to see how people offer help in
different ways, and all help, of whatever nature, is very much appreciated!  Thank you all, and, in
return, please remember, that the Church is always there for you, whenever you need it !