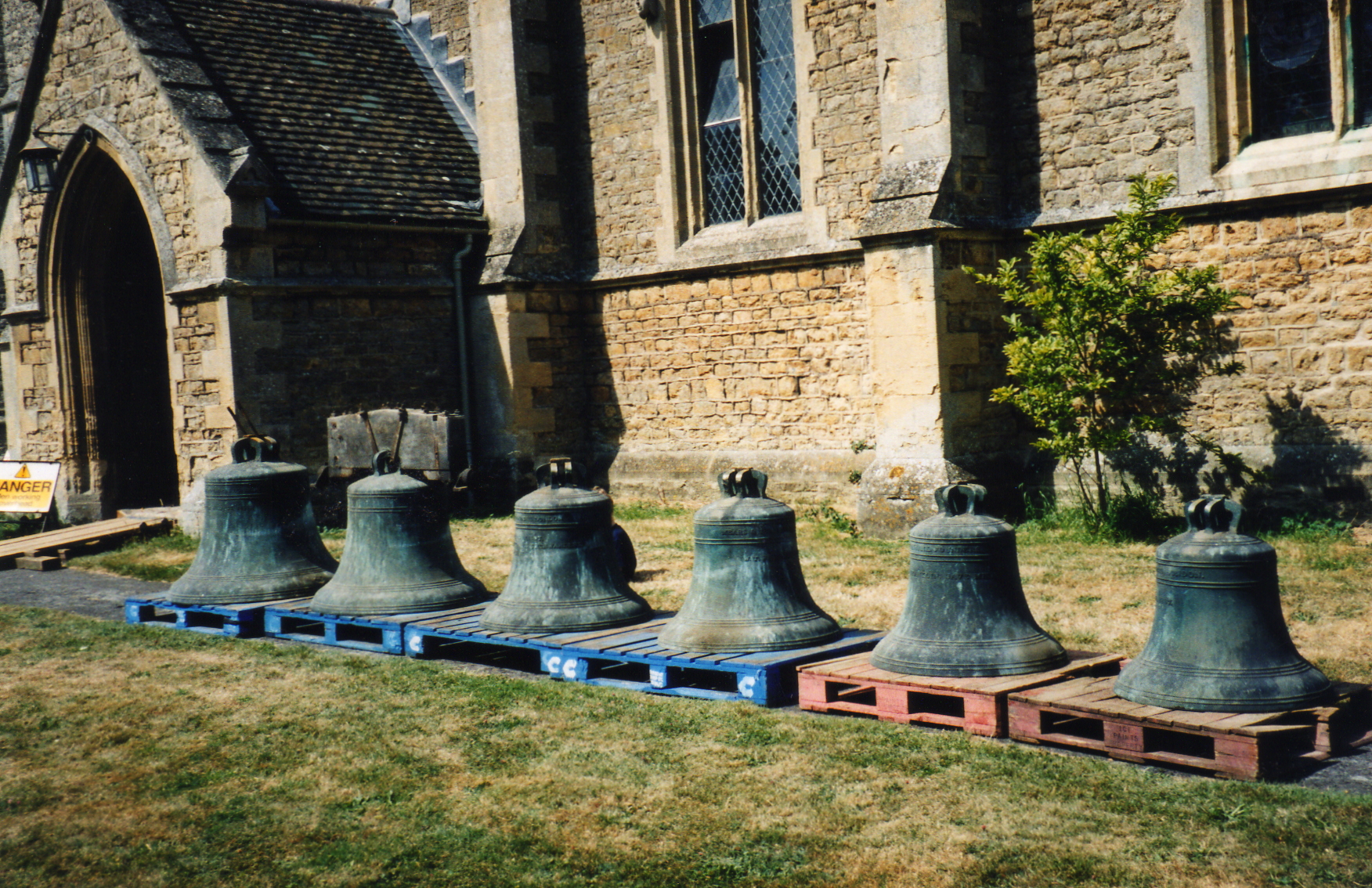 An article included in the Ringing World in May 2000

The Parish Church of St James stands in a dominant position in the village of Little Milton, some ten miles Southeast of Oxford. The Village has 490 on its Electoral roll and is an active community. The Church was built in 1844 and is a Grade 2 listed building

The Quinquennial inspection in 1991 advised the Rector and Churchwardens that they should obtain advice on the safety of the bells as the architect had some concerns. It was not until September 1993 that the Diocesan Bell advisor produced a report and as a result ringing was suspended by the Rector. The bell ringers were shocked to lose their bells but safety could not be ignored. The PCC were keen to action the recommendations that were outlined in the report and agreed that we should put a plan together to reinstate the bells at St James.

A report was produced by Whites of Appleton detailing the work that had to be done. The key recommendations were

> Vertical tie-rods should be fitted to tighten all brace joints

The estimated cost of the project including work that had to be done to the tower itself was £46,000. Financing the project was going to be a real challenge.

An application was made to Heritage Lottery Fund and we were successful in gaining a 45% grant of the estimated cost, £20,000 but that still left a gap of £26,000. We received confirmation of the grant in January 1998.

Unfortunately our Rector left the parish in May 1998 and the responsibility of delivering our project fell on the shoulders of the Churchwardens of which I was one. The Millennium was now on the horizon and we took the opportunity to set ourselves the challenge of having the bells rung on January 1st 2000. This captured the imagination of the village and we were given a lot of support through various fund raising events that included a Food Frolic, Promises Night as well as proceeds from the Church Fete. In all the village had raised over £8000. We were also very fortunate to receive private donations as well as grants from various organisations: Oxfordshire Historic Churches Trust, The Historic Churches Preservation Fund, SODC Conservation Fund, The Sharpe Trust, The Oxfordshire Environmental Trust, The Oxford Diocesan Bell Fund.

The next stage was to plan the work and it was a very special moment when the Bells were lowered from the Belfry on the 21st July 1999. There was a small gathering of villagers to witness the moment. It would be some time before the bells came back but work was going ahead on the tower walls. There were regular phone calls to Brian White as he checked up on the building work. Finally the day arrived in mid December when our bells were returned looking shiny and new. The Millennium was just a couple of weeks away and our vision of ringing the Bells on the 1st January was about to be realised.

On the 23"' December Brian White arrived at the Tower with his team of ringer to give the Bells their final check before being handed over. Central Television was there to capture the moment as the bells rung out after six silent years. A sweet moment indeed.

Finally after a short service of dedication conducted by the Reverend Victor Story we made our joyful Millennium sound. It was a moment to savour as the ringing team had only been together for eight months. It had been a very enjoyable period but our trainers had been very patient as we all struggled to carry out those simple commands like " Stand". Our sincere thanks go out to them.

On the afternoon of the Millennium Day the village was treated to a quarter peal from our mentors and we all look forward to the day when we will ring to the same high Standard.

A Bell Ringer by the Millennium?

Like many other villages, our most ambitious 'Millennium Project' was to repair our church bells. The village newsletter asked for new bell ringers to train to ring the New Millennium in. I've pulled the odd rope on sailing ships so I thought I'd give it a go.

As our bells could not be rung our neighbouring towers, Great Haseley and Great Milton, offered Saturday morning practices. The spiral staircases of the old churches were hard going. At the first practice I was relieved to find that at least half the new recruits had little or no head for heights!

Eventually I pulled my first rope ... and made mistake number one ... I looked up. If you are tacking a square sailed ship you must look up at what you are doing with the rope - so the first thing I had to do was unlearn looking up! What patience in our teachers. Once I got to the stage of following another bell it was much easier.Our teachers were very pleasant, informative and helpful and eventually I got to that awesome stage when I usually knew what I was doing wrong and had a good chance of putting it right - if I concentrated hard.

We were invited to join local ringers at their practice nights. Ringing rounds and call changes was great - progress at last... but it sounded so much better when there was a minority of beginners. In the Autumn our teachers put it on the line - we would not be ready to ring by ourselves on New Year's Day. At this time our bells were not back and we did not know if they would be back in time. A compromise evolved. The village had worked so hard to pay for the bells that they deserved to hear them - if it were at all possible.

The Wednesday before Christmas our bells were handed over. My mind was full of "Hark the Herald Angels Sing," and when I first heard the 'hum' of the harmonics as they were expertly rung I thought of a distant angel choir ... (I did after all agree to do the emotional bit of this article!). When I rang one of our Little Milton bells for the first time I was very fraught - I did everything wrong despite loud volumes of advice from the bell hanger and various 'helpful' yanks. My teacher congratulated me when I stood the bell -1 confirmed later that it was congratulations more for keeping my cool than for any bell ringing prowess!

We were quickly taught how to chime. Then we had one quick practice after Christmas. On New Year's Day the bells were blessed at 11.55am as part of a short service. We all chimed them for five whole minutes at noon. It seemed a long time that five minutes - and when we stopped there was a strange noise from outside. It was a round of applause. Several village families were enjoying the return of the bells (and the sunshine) below the tower ... but that was just the 'overture.' Our teachers were ringing elsewhere and were due in our tower at 1.30pm, to ring rounds with us and then a quarter peal. Some ringers had rung the New Year in, and rung at noon - we invited them to lunch.

So quickly home, moving the food around in the oven, and back to meet our teachers and to ring a few rounds with them. Whilst they were ringing a quarter peal, home again with some of the other ringers to finish the lunch for us all. A treat to talk to the people we had most often heard saying things like 'look to,' 'stand,' '2 to 5' and DON'T LOOK UP.

A small thank you for all their time, patience and expertise.