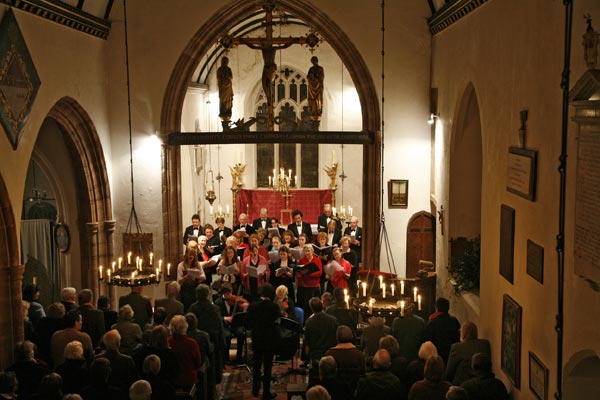 The Church at West Bagborough is dedicated to St Pancras, whose Feast Day is 12th May. It is within the The Bishops Lydeard Benefice .The Church, which is a Grade ll* listed building, is a restored 14th century building, nestling into a steep slope adjacent to Bagborough House. The North aisle was added in 1839 and further restoration was undertaken in 1872. It was beautifully decorated in the 1920s by Sir Ninian Comper. It seats 200, in two aisles, has an excellent 200-year-old organ and a tower with a ring of six bells. Access to the Church is either by an uphill footpath from the road, or from the driveway of Bagborough House (by kind permission). The style of worship is rooted in the Catholic tradition, and incense is used regularly.

The church stands high above the main village, and allegedly owes this separation to the Black death, which reduced the population to below one hundred souls in the fourteenth century. In an attempt to rid themselves of this plague the villagers abandoned the original settlement and re-built, away from the church. The Lychgate is dedicated to the memory of Robert Brook-Popham. The old rectory is now known as Little Court.