Brompton Ralph is a village and civil parish in the West Somerset district of Somerset, England, about 11 miles west of Taunton, and 3 miles north of Wiveliscombe. It is in a wooded district at the eastern extremity of the Brendon Hills. According to the 2002 population estimates it had a population of 287. In 2015 it has 161 registered electors

The village, about 10 miles northwest of Taunton, consists of a scatter of cottages and farms of various dates around two village greens. The larger Brompton Green lies beside the church and was allotted for recreation in 1845. The smaller was formerly the pound and nowadays flanks the Post Office Stores. Perhaps it still has an atmosphere of refuge because it so often happens that on this triangle of grass where three lanes converge, straying animals pause for a nibble enabling the postmistress to telephone their probable owners.

John Toms, glass stainer, was born in Brompton Ralph between 1813 and 1815 and his work can be seen in several nearby churches. In 1913 a Mr Toms, his descendant, came from the USA and paid for the restoration of the ancient screen in the church in his memory.

Probably the most interesting surviving building in the village is a cottage which seems to have been a parsonage or church house. The present owner has uncovered beneath layers of plaster on a sitting room wall a painting of religious theme. The lack of perspective and the figures' neck ruffs and little pointed toes imply an early Renaissance period of origin although so far nobody has established records of any authorship or history.

In the 1970s when the village hall was recreated from the remains of the old Sunday Schoolhouse a few enthusiastic members of an art class painted a mural of the life of the village with several recognisable characters including the then rector on his motorbike. The village is as proud of this work of art as of its 16th century predecessor.

The village has no pub and has long lost its school and its bus service but is fortunate in its well stocked community run village shop. Who could possibly prefer a supermarket? And when, as occasionally happens, the lanes to Wiveliscombe are blocked with snow, nobody starves.

As in olden times agriculture and sheep are the daily labour of the inhabitants, who are a happy mixture of the old families and newcomers and who keep alive old crafts (the archway curtains in the church are handspun and hand-woven} and collaborate in the seasonal activities of the church.

The Parish Council consists of six elected members who meet every 2 months the village hall. 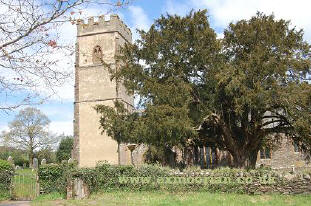