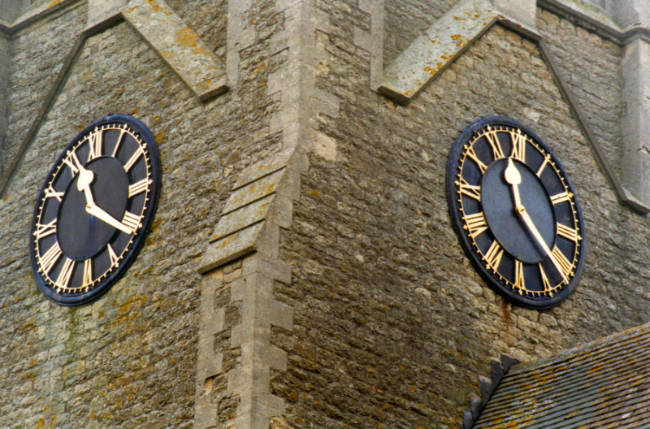 The clock installed in the tower is a two train cast iron flatbed type turret clock, designed to show the time on two exterior dials, approx. 6 feet in diameter, and to strike the hours on the church tenor bell. It is located on the second stage of the tower, with access via fixed wooden ladders inside the tower. The clock is enclosed in a wooden clock case against the East wall of the tower. It is supported on wooden beams, built into the East wall and also supported from the floor. There is a fixed wooden platform for the clock winder to stand on.

No makers name or date is marked on the clock. However, various features would suggest that the maker was Bailey of Salford, Manchester. The date is probably in the late 19th century.

The clock has a substantial cast iron arched plate & spacer flatbed frame. The various bushes and sub-frames for the wheel trains are bolted to this frame. The bushes have lubrication holes with screw caps. The clock has cast bronze wheels and leaved type pinions. It is driven by heavy weights which descend on double pulley systems in the South West comer of the tower. A manually engaged weight maintainer is fitted to keep the clock going while it is wound up. The striking train barrel has a jack wheel to reduce the effort needed to wind up the weight.

Timekeeping is controlled by a wood rod pendulum with cast iron cylindrical bob beating two seconds. The long pendulum hangs below the floor in a wooden trunk. The escapement is the pinwheel dead beat type. There is a spring loaded safety crutch to prevent damage to the escape wheel pins if the clock should stop. A horizontal lead-off rod at the back of the clock connects the drive to the East dial motion-work. Further lead-off rods and bevel gears connect the drive to the South dial motion-work. With this system there will always be more backlash in the South dial drive. It is thus not possible for both dials to always show the same time, and there will be a few minutes difference. The clock is set to time by means of a friction clutch,. The time is shown on a setting dial at the front of the clock.

The exterior dials appear to be one piece iron castings with raised roman numerals and minute track. These are fixed with studs through the tower walls and spreader plates on the inside surface of the walls.