The club was formed in 1911 when a public meeting promoted by the Rugby Chamber of Commerce decided to form a Bowling Club. The only green available was at the Recreation Ground on Hillmorton Road so arrangements were made with the Council to use this ground. The relationship between the Club and the Council was always cordial but the condition of the green was a continual source of angst and efforts were made to obtain a private green.

In 1927, Mr. Taplin kindly offered the Club its present ground on the Westfield Estate with access from the Bilton Road. A stumbling block was the raising of upwards of £1500 to lay a Cumberland Turf (CT) green and to build a pavilion. To finance the project, a limited liability company called the Rugby Bowling Club Co. Ltd. was incorporated on the 16th Dec 1926.

Many members and other sporting sympathisers took shares in the company and the money was raised. In June 1927, the new green and pavilion were opened by Captain Margesson, the MP for Rugby. 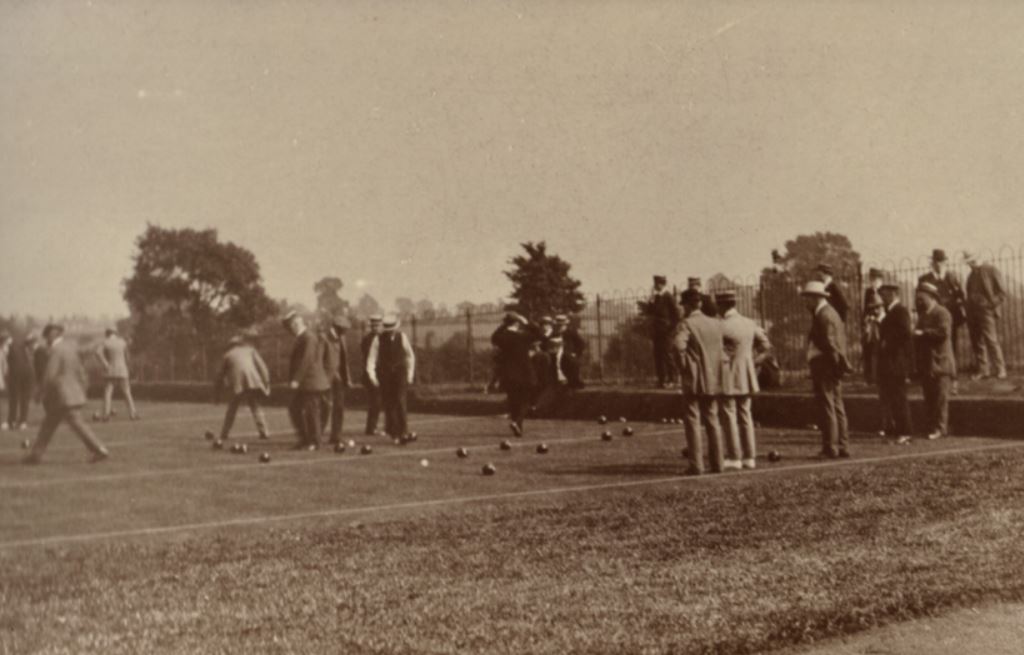 Carried through at a cost of over £1,500, the Rugby Bowling Club's scheme for having their own full size Cumberland Turf green and pavilion, instead of playing on the Rugby Urban District Council's green in the Recreation ground, advanced as far as the opening ceremony on Saturday.

The ground is pleasantly situated close to the Bilton Road on the Westfield Park Estate (which is being laid out by Mr. W. H. Taplin). The green has been built up on a level piece of ground at the foot of the first hill from Rugby and the pavilion faces across the Park, towards Rugby.

In the first match, Rugby beat the Warwickshire County Bowling Association by 138 shots to 91.

Mr. J. T. Clarke unlocked the pavilion - a large timber and tiled structure with verandah - surmounted by a clock, providing changing rooms, a main room, bar and other offices. The flag at the entrance near which is a tennis court, also the property of the club, in the absence of Mrs. Margesson, was unfurled by Mrs Wardrop and she was handed a bouquet by Audrey Taplin.

Capt Margesson remarked that a politicians duties were heavy and kept him too much indoors so that it was a pleasure to attend an open air game. Young people should not imagine that bowls is a game for old men for it provided plenty of exercise. The ceremony was the outcome of a great deal of hard work by the committee, the success following two previous attempts which, for one reason or another, failed.

Bowlers' Dream Comes True
After the opening of the pavilion, Mr. W. H. Taplin, contractor and a member of the club, handed the key to Mr. Clarke who said it was his pleasure last autumn to congratulate the club on the prospect of a new ground and now it was a privilege and a joy to congratulate them on its consummation. They have a green in beautiful surroundings to which they would not be ashamed to invite any club in England. The club had been in bonds since its formation and now the bonds were severed and they could do as they pleased without fear or favour. Having dreamed dreams for years and years of a bowling green, a tennis court, putting green with babbling brook running through and a pavilion where they could get refreshments, their dream had come true.

The fame of bowls is an ancient one. Southampton claimed that they laid down the first bowling green in 1299. Plymouth Hoe was where Drake was said to have played, Shakespeare was supposed to have played and if he did not, he knew about it, for he mentioned the game in several plays. There was scarcely a town where bowls was not played. It is as much a national game as cricket and football. People said it is an old man's game - it was. There was an old man who went to the green at Bournemouth within a month of his 103rd birthday. It is also a young mans' game and young men were taking it up. Bowls was a popular national, pleasant, sociable, skilful and healthy game.

The green had not been laid without a tremendous amount of work. In October last year they appointed as directors Messrs. Bluemel, White, Howell, Dr. T. Wardrop, Pollard, Johnson and P. James. They put their hearts and souls in the work from the beginning and had given unstintingly of their time and abilities and he hoped they were as proud of the result as were the other members. Mr. C. Antill, the Hon. Secretary, had been energetic and had 'come through smiling'. Mr W.H. Taplin, the contractor, has shown a sporting interest in the affair from the beginning and had made it possible by selling the ground at a reasonable price and granting them many favours. They were also grateful for various gifts of seats, chairs, plants, shrubs, clock and fittings from the following: Dr. T. Wardrop, Messrs. C.W.Bluemel, B Haynes, F. Down, T. Shenton, R. A. Avery, J. Beese, H. Ridgeway, L. S. Howell, H. H. Goods, T. Banner, A. W. Smith, T. A. Ryecroft, C. Antill, R. Thomas, W. Cowley, W. H. Taplin, A. E. Townsend, J. Pariss, E. J. Brievogel, E. Woodroffe, E. J. Pollard, C. H. Rowbottom, H. H. White, F, Lloyd, W. Tomes, A. Bodycote, A. Whittaker, P. James and W. Herbert.

Warwickshire's Congratulations
Capt. Margesson supported the appeal that the club should not suffer from lack of financial support. Mr. H. Lupton-Reddish conveyed the good wishes of the Warwickshire County Bowls Association of which he is president and said it was the ambition of every bowler to play on a Cumberland Turf green, for they all knew what it is to put down a good wood nicely delivered and with nice weight and then, just as they thought it was going near what it was put down to do, it kicked out against the bias. It would be a season or two before this green settled down and he gave them the heartiest good wishes for the success of the green.

C. Antill proposed a vote of thanks to the speakers and in seconding, Mr. F. Black referred to the fact that Mr. Clarke had been connected with the Club almost since its formation. He had been ''pitch-forked'' into offices of nearly every kind and deserved the heartiest thanks to all bowlers for his work. They also owed a debt of gratitude to Mr. Reddish, a member of the club, who as their legal advisor had done his utmost to help them

At the tea provided for players and visitors, Mr. W. H. Taplin, captain of the club, welcomed the members of the county team and said it was a proud day in the progress of the club, for they had long cherished a dream to possess their own private green and pavilion, especially a Cumberland Turf green and all that that meant. The real initiative was taken after the match last September, for on congratulating Capt. Strong and Coventry club on their enterprise, he responded by urging Rugby to 'buck up and get busy'. They had been busy, they were also proud and honoured to be playing Warwickshire and asked them to take their greetings to their respective clubs and tell them they were looking forward to playing them in many pleasant matches both at Rugby and away.

Councillor W. Ivens, Capt. of the county team, said as one who had a great deal to do with recreation and games in Coventry he appreciated the private enterprise in Rugby and they would find being under their own control better than public control.

The chairman proposed thanks to the press and Mr. E Woodroffe, an ex-secretary of the English Bowling Association said the Association was looking for its strength to private clubs rather than municipal greens, which were not self-supporting. Touching on the rise of the level green game, he pointed out that it was due to the enterprise of some Scotsmen in London about 70 years ago and the level green game was the only one they learned and could give them internationals. He had a great respect for the crown game, but the asset of the level green game was sociability. He read a telegram from the Middlesex County Bowls Association congratulating Warwickshire on the opening of Cumberland Turf greens at Rugby and Coventry.

Among the guests were Mr. C. W. Beadle, secretary of Cambridge County Bowls Association. and Mr. S. R.H. Molyneux of Bedford Bowls Club, an ex-president of the English Bowling Association and a native of Rugby. 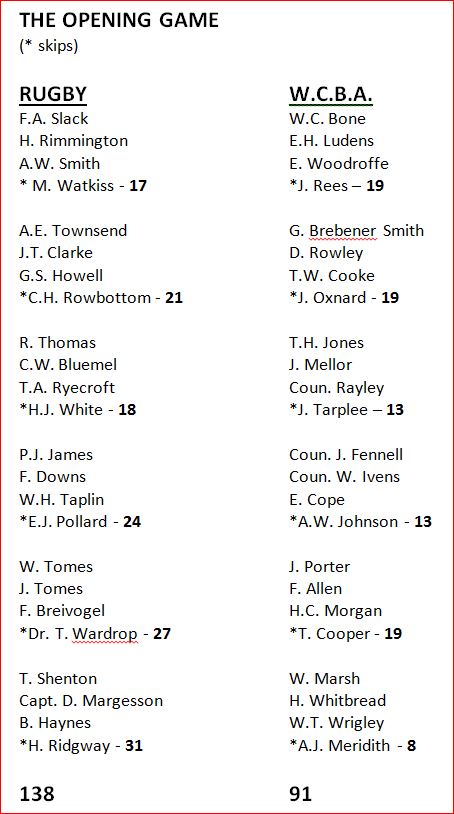 In 1945 the club members evolved a scheme to purchase the assets of Rugby Bowling Club Co. Ltd. and they became the owners of the clubhouse and green. This was largely thanks to a Mr. J. W. Clarke who donated a sum equal to that raised by the members. That clubhouse was extended in 1953 along with improvements in the toilet facilities. To celebrate the completion, on 12th June 1953, they had the honour of a visit by Robert Kirkland (Northumberland) - President of the English Bowling Association and Rugby Bowling Club played a game against Warwickshire President's team.

In the 1970's, a Banbury Buildings concrete verandah was incorporated along the front of the original wooden clubhouse. In 1984 the club obtained planning permission to erect a new clubhouse, the present building, at right angles to the old clubhouse and then in 1985 the Club purchased a strip of land from the Council to enable this new clubhouse to be moved further away from the green. Money again was the issue and was overcome by selling a building plot (No. 141A) fronting Bilton Road, a £1000 grant from Rugby Borough Council, a £3000 loan from the Sports Council, a £10,000 loan from a brewery, using the club’s own savings and donations from club members. The building was eventually completed thanks to a lot of hard work by many members and was officially opened by the Mayor of Rugby, Councillor Reg French in September 1987.

The new changing rooms were a vast improvement on the old clubhouse but over time it was realised that they were too small and in 2003 a Portacabin was sited on the patio to provide changing facilities for visiting teams and help to relieve congestion. While not ideal it proved adequate for some years and enabled the club to put money aside towards a permanent extension. In 2010, with a grant of £10,000 from Lafarge Aggregates and a donation of £85,000 from George Wimpey Limited for permission to alter the course of the Sowe Brook through the front car park, it was decided to proceed with the extension.

The project included three new changing rooms as well as doubling the size of the kitchen with a complete refit. The improvements also included extending the bar area into what was the kit room and by knocking down the old changing room walls the space was incorporated into the main hall.

Once again club members undertook a lot of the work themselves; firstly demolishing the portacabin and clearing the site, redecorating the building throughout and tiling the kitchen and bar extension. Contractors laid new carpet tiles in the main hall and changing rooms and vinolay in the kitchen and toilets. The extension was officially opened by the Mayor of Rugby, Cllr Don Williams on Saturday, 26th June 2010 before members played a match against Bidford-on-Avon. 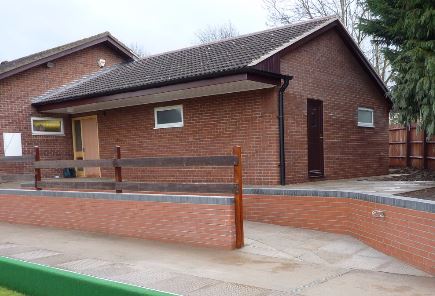 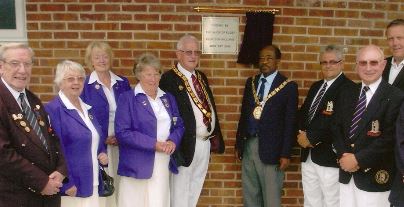