Stockton Football & Cricket Club is run by our members for our members.  Our team of volunteers manage the day to day running of the building and the upkeep of the Pitches, Courts, Piste and hedges to give our teams the fantastic facilities they have.  The majority of our bar staff are also volunteers, there to provide welcome refreshments to players, spectators or just for a social drink in the evenings.  We are open to non-members on special events such as the recent Christmas Wish Tree event, but anyone is welcome to join as either a playing or a social member.

The Napton Road clubhouse was won in a raffle - it was previously a Co-op building. Stockton came third but the other winners couldn't transport the building, so many hands helped in its transportation and construction.

We now boast Football, Cricket, Netball, Pétanque, Dominoes & Darts teams. We have a well-stocked bar, and Sky TV & BT Sports showing all your favourite games. For social members we have a pool table, dart board, dominoes and play indoor Pétanque. We also have a function room available for hire.

SFCC and its clubs are proud to be involved in community and Charity events. We recently hosted the lighting of the Beacon to commemorate the end of WW1. We also participate in the Stockton Beer Festival, Scarecrow Trail and the Christmas Wish Tree event.  Throughout the year the Netball ladies have hosted several dog walks and a barn dance for Dogs For Good. Also we host occasional quiz nights, childrens’ parties, Gin nights, the Pétanque Beaujolais night, and live bands. Check out our Facebook page for our upcoming events:  www.facebook.com/StocktonFCCC

Stockton has had a football club since 1894 and for over a century now has held an annual Charity Cup which is played for between our neighbouring villages.  We play on a Saturday afternoon.  We have two full size pitches in view of the club house and also a training field. Our pitches are also used by other football clubs to hold their matches so you can sometimes see matches being held on Sundays as well.  There is usually a good crowd who come down to support us either from the touchline or inside the club. Over the summer holidays there were training sessions for children and we hold an annual 5 a side tournament that uses both pitches and the training field.

Stockton Netball was formed in the 1970’s with a senior team known as the Stockton Cherries. Now known as Stockton Ladies Netball Club we have 5 Saturday Senior Teams, 2 midweek senior teams and 5 junior teams (2xU16, U14, U13 & U12).  With opportunities to play competitive league Netball on Saturday as well as more relaxed Netball with our 'back 2 netball' teams. We have a team of coaches on hand to dispense advise as well as qualified umpires for officiating. We have a large junior section & encourage girls to progress through to our senior sides when they are old enough. Stockton is a fun, friendly & sociable club.  New players and supporters are always welcome.

Stockton has had several cricket clubs over the years, originally they rented local fields but created a permanent wicket at the Football Club when it was built. After a hiatus of a few years we are pleased to welcome cricket back to Stockton on a regular basis thanks to a team originally from Coventry.  It was their first season with us this year and we hope we made them feel welcome, there was certainly some exciting Cricket being watched this year both on the pitch and inside the club on the TVs. 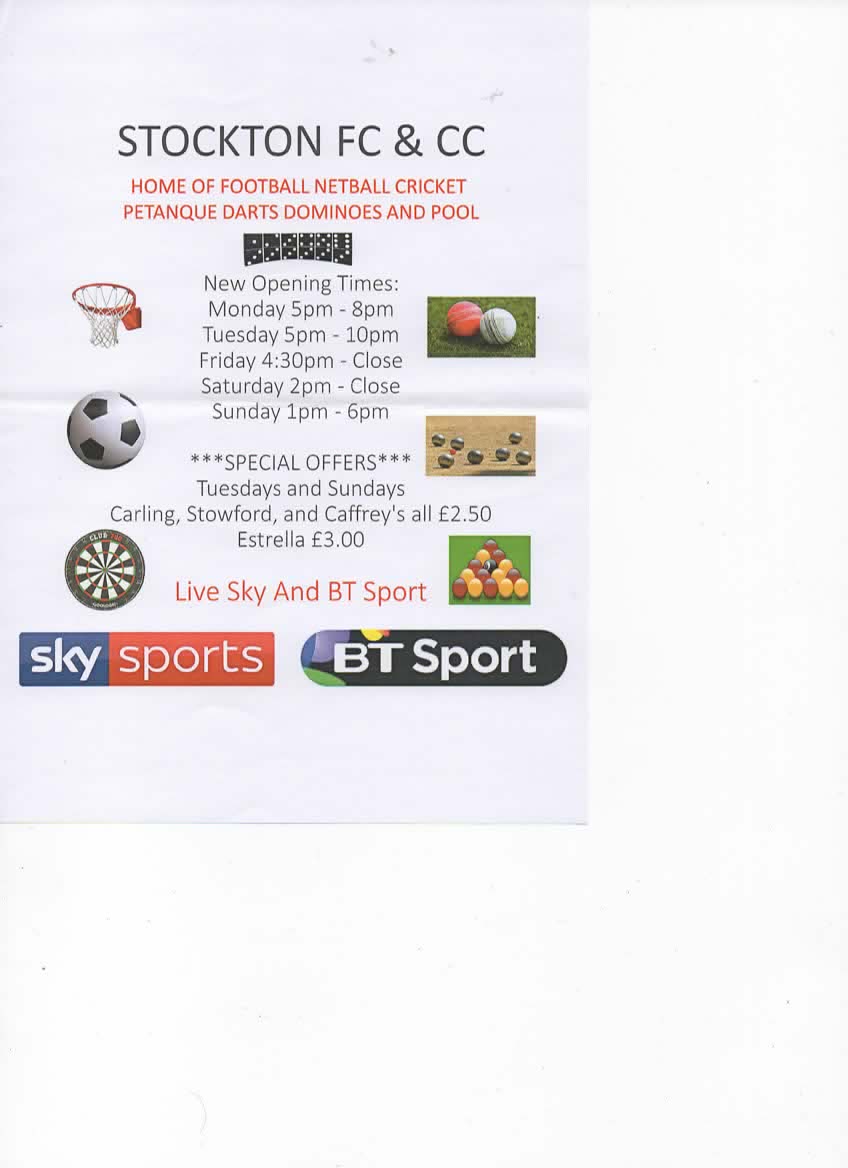