The following information is taken from: 'Abdon, A History of the County of Shropshire: Volume 10', and 'Abdon - St. Margaret's Church and its local history'.

The Rector had a school in 1662, and there was a day school in 1831.  Abdon C.E. school was opened in 1850 as a parochial school in a new building provided by the Lord of the Manor and managed by the Rector, the Rev. W.S. Dear who by 1870 made up any annual deficit.  It consisted of two rooms and a teacher's house under one roof.  The windows were placed high in the walls to prevent the pupils being distracted by all the lively activities around.  There were around 20 pupils in 1870.  Boys and girls were taught together in the larger room in the morning; in the afternoon the master's wife taught the girls sewing in the other.  The school was temporarily closed in 1946 and the children went to Burwarton C.E. school.

In December 1947 Abdon School was permanently closed.  A one-teacher school and small numbers was not a viable situation.

Mr TW Bradley, of Manor Farm Abdon, who as correspondent, was instrumental in obtaining the school and the adjoining school house for use as a Village Hall.  The first Annual General Meeting was held in May 1953.

The Village Hall has continued to be run by a Committee of Management.  Improvements have been made to the Village Hall with a new toilet block being added and more recently, a modernisation of the kitchen.  However the character of the old schoolroom has been retained and an open coal fire is a joy in the winter months. 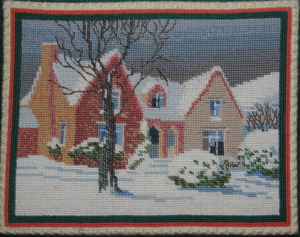