Parched Ampfield - The summer of '22 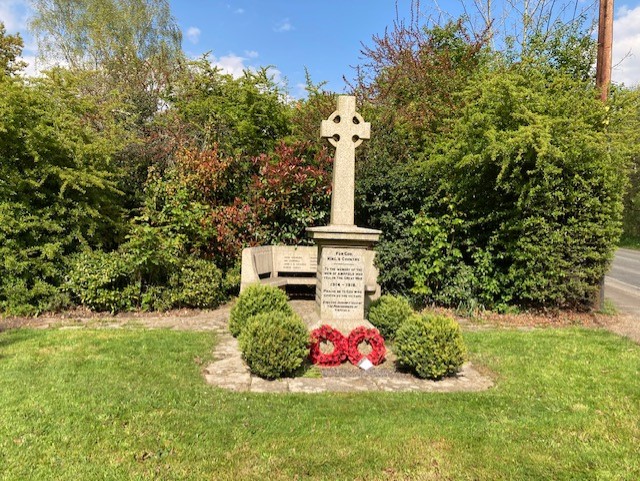 In the aftermath of the First World War, communities all over the country began to think about how they should honour and remember those amongst their local residents who had given their lives in that momentous struggle. Ampfield was no exception to this countrywide outpouring of grief concerning the impact the war had had on every single community.

The following account has been extracted solely from the Ampfield Parish Council minute book, taken between the years 1918 – 1923.

Discussions were held in council to decide the form of the memorial to be erected in memory of the parishioners who had fallen in the Great War 1914-1918.

Rather than an obelisk, the chairman, David Faber, proposed that the memorial should take the form of a white stone cross with all the names of those that had fallen inscribed thereon. He proposed that it should be placed at the south end of the school fence.

The chairman then proposed that everyone in the parish should contribute to the cost of the memorial, even if it was only 3d.

Minute of the meeting of the War Memorial Committee, 3rd April 1919

The chairman reported he had seen Mr Pace, a stone mason from Romsey, who should be employed to erect the memorial. The memorial would be a 12' high cross, made of grey Cornish Granite. Subject to the agreement of the school committee, it should be fenced off from the school playground,

There followed a discussion as to eligibility of the names to be inscribed on the memorial. It was decided that members of the committee would each propose a list of names for consideration at the next meeting, April 17th.

The chairman would take a drawing of the proposed memorial to the stonemason and ask for an estimate of costs,which be available before the next meeting,

Minute of the meeting of the War Memorial Committee, 17th April 1919

Permission to allow a portion of the school playground in the south-west corner of the school was granted by the school managers for the erection of the war memorial. It was proposed that a wooden fence originally suggested for the area should be replaced with a wrought iron fence 3' 9" in height erected all around the memorial.

The height of the cross would be reduced from 12' to 9' at the suggestion of the stonemason. This would considerably reduce the cost, whilst looking very much more suitable.

It was decided that names on the memorial should be in alphabetical order, surname first.

Minute of the meeting of the War Memorial Committee, 17th May 1919

The names of the parish collectors, who would canvas members of the parish for subscriptions to cover the costs, were proposed. The parish was divided into 5 areas, each with its own collector. The cost of the collection books was recorded as 1/-. Once collections had been taken, it was agreed to write to the 'leading gentlemen' outside of the parish who held particular interests within the parish.

Minute of the meeting of the War Memorial Committee, 30th June 1919

It was recorded that the total amount collected was £31-5-11d. David Faber, who collected in the Jermyns/Pucknall area, collected the largest donation £8-5-0d. The smallest donation was £2-2-0d collected by the vicar, rev. Jones. In addition, the Rev Awdry donated one guinea. The money was paid into Lloyds Bank in Romsey.

It was agreed that David Faber should be the arbiter if the list of names included for inscriptions came to a vote. The vicar was also asked to contribute a list of names. In addition, three further names were considered but rejected, as they were not parishioners at the time of joining up. The clerk would investigate one of these Albert Way from Pucknall further.

It was proposed a suitable book be obtained to record the names of all the subscribers but not the amounts.

Present: Messrs Faber, Hampton, Parr, Parsons and Travis. Vicar was absent. Stonemason Pace was instructed to proceed with the work.

Present: Messrs Faber, Hampton, Parr, Parsons and Travis. Vicar was absent. The chairman presented a programme of the proceedings for the unveiling of the war memorial. This was carried unanimously.

Unveiling of the memorial by Mr Faber

An address by the Archdeacon

God Save the King

It was noted with regret that vicar was not present to arrange what hymns should be sung and in what order.

Present: Messrs Faber, Hampton, Parr and Travis. Vicar and Mr Parsons were absent. The clerk was asked if he had communicated to the vicar the unanimous resolution of the committee as to procedures to be observed at the unveiling of the war memorial. Clerk confirmed he had done so. Mr Parr remarked that the vicar had disregarded the resolution, which was an insult to the committee and might 'have led to a brawl'.

The chairman proposed the following resolution: "that the committee condemned the conduct of the vicar for not carrying out the programme arranged for the unveiling of the war memorial and his want of courtesy in neither attending the meetings nor communicating with them". This was carried unanimously. The clerk was requested to send a copy of the resolution to the vicar.

The payment to Mr Pace was agreed. Thanks were offered to Sir George Cooper who had donated £35-4-2d, 50% of the outstanding balance.

It was recorded that Ampfield Parish Council had decided to remove the iron railings in favour of white posts with draping chains.

The War Memorial Committee passed the war memorial into the hands of Ampfield Parish Council.