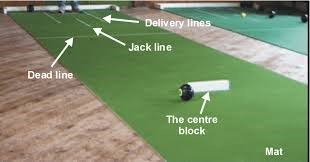 Short mat bowls is based on the outdoor version of the game, so most of the rules are the same or adaptations of the rules of the outdoor game. The following describes the major differences and should be helpful to new (and old!) players of the game.

1.   The rules for Short Mat Bowls as laid down by ESMBA (see above) will apply to all competitions.

2.   All Full members and Social Plus members are eligible to play in Short Mat competitions.

3.   Fixtures must be played on the scheduled date as published on the Club’s web site. If a team is unable to play on that date, you must inform the organisers and the opposing team in advance. The organisers will try to find an alternative date, which is acceptable to both teams.

5.   Any team causing a dead end (jack off side of mat) in either Pairs or Triples Leagues or in Knockout competitions will automatically lose the end, conceding 2 shots.

6.   Pairs matches will normally be played over 15 ends. The duration may be reduced by the competition organiser, if one or both members of a pair are late. The reduction will be one end for every full 3 minutes, down to a minimum of 10 ends.

7.   Triples matches will normally be played over 12 ends. The duration may be reduced by the competition organiser, if a team or team member is late. The reduction will be one end for every full 4 minutes, down to a minimum of 9 ends.

8.   Matches in both Pairs and Singles competitions will be played over 15 ends. The winner will be the pair or player with the higher number of shots on completion. If the scores are tied after 15 ends, an extra end will be played to decide the winner.

9.   Pairs are expected to play as entered. A substitute may be allowed as in Rule 4 above for one match only in early rounds, but cannot be a player entered in the same competition, even if already eliminated. Substitutes may not compete in Semi-final or Final matches.