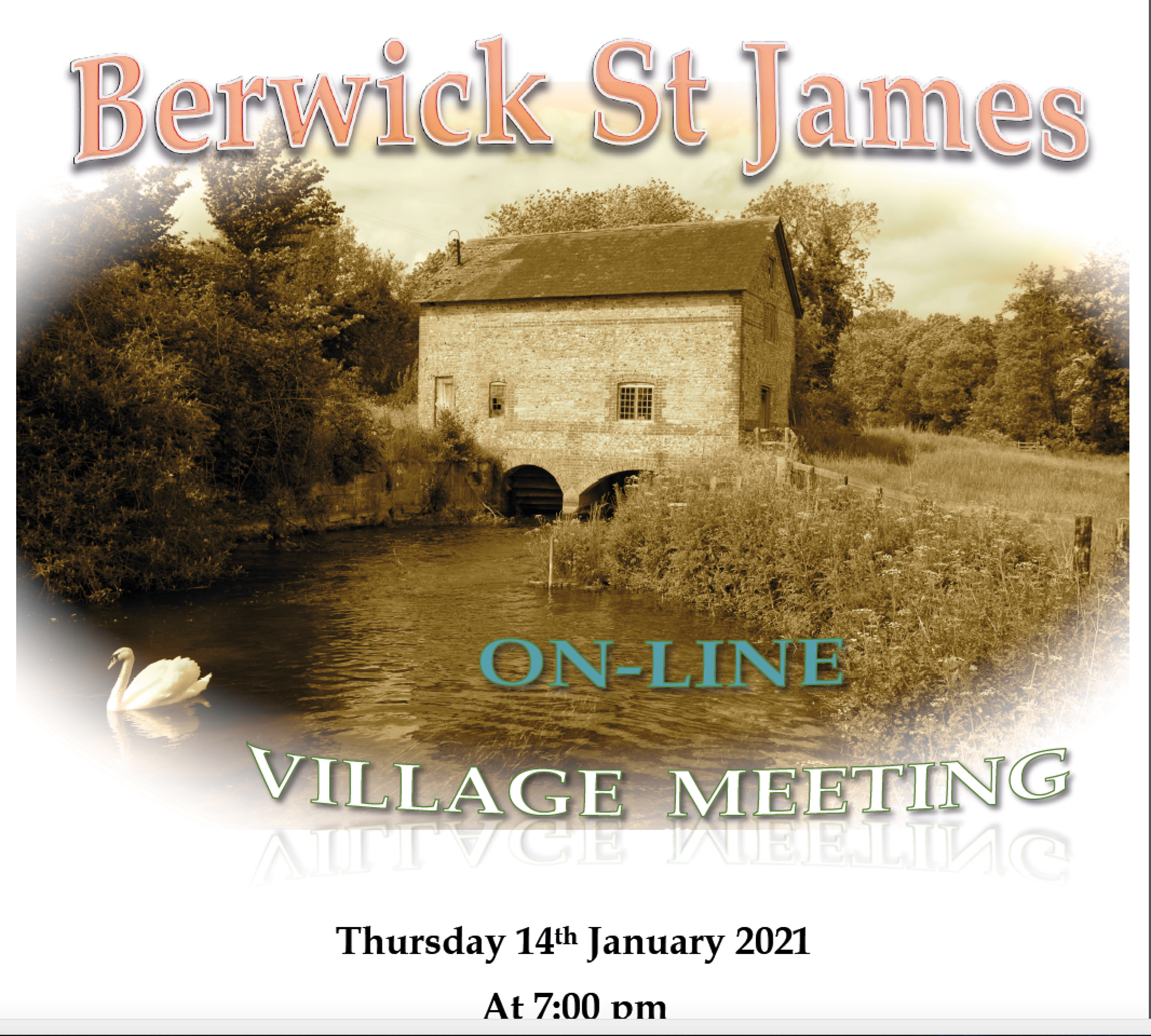 Total in attendance: 26 online devices (about 34 people present) plus some on landlines.

Summary of issues discussed and decisions made

The chairman opened the meeting at 7pm, extended a welcome to all and informed everyone that the meeting was being recorded for the benefit of anyone unable to attend and that a copy of the minutes would, as usual, be posted on the village website.

Christian also informed the meeting that Kate Wood would be standing down as secretary due to an increase in her professional workload and Hayley Burrey had kindly offered to take over the role. Christian expressed sincere gratitude to Kate for all her work as Secretary over the past few years. She was given a virtual round of applause.

The minutes of the last meeting, held on 28th September 2020 were deemed to be a true and accurate reflection, proposed by Bill Hiscocks and seconded by Shaun Haggarty – electronic vote 100%.

Stephen, Bill and Martin were all thanked for organising a wonderful and well attended outdoor carol service on 22nd December with readings from various children in the village and excellent singing from the choir. Thanks were also extended to Chris for the lighting of the church and providing the sound system. Charlie, Stephen and Bill were also thanked for supplying and erecting the large Christmas tree in the church yard.

Brian Armstrong was also thanks for his fascinating and informative art lectures.

The repairs to the village bus stop are now complete.

Bill informed the meeting that the Salvation Army clothes bin had raised a total during 20/21 0f £39.43p.

Summary of accounts and village precept.

Bill informed the meeting that the village accounts stood as follows:-

Bill suggested to the meeting that amount of the precept for 2021/22 be kept at £2000 – proposed by Neil MacDougall and seconded by Charlie Street and the electronic vote = 100%.

A group from the village including Chris, Sarah, Bill, Sally, Andrew, Hayley and Charlie have formed to create and run a covid-19 support plan. They meet regularly to oversee the running of the buddy groups, medication/prescription collections and shopping deliveries (as previously organised for the earlier lockdown) and to again organise more fun activities.

Sally had previously reported that the buddy groups continue to work well but encouraged everyone to take more care and maintain vigilant precautions and if in need of anything “don’t be alone pick up the phone” as the numbers of Covid cases continue to rise. The farm shop will remain open as usual and Marilyn would be grateful for any volunteers who were prepared to help with deliveries of food, Mike Riding volunteered. Chris said if anyone was in need of transport whether urgent/non-urgent they should let him know and Neil offered to assist with any transport requirements. Keith mentioned that he had visited Tesco at 8.30pm and found it very quiet and suggested this might be one of the safer times to visit. The Boot Inn will remain closed until restrictions are lifted.

The village social media sites are still functioning, the WhatsApp group should be used for more important/urgent information and the Facebook site for the more light-hearted exchanges. Hayley said the book club was still working well with about 8 members at present

Note:  More detailed information is available by clicking this link

Carolyn provided the meeting with an update on the A303 proposed works. A full update can be found on the village website on the following link by clicking here

AMESBURY TO BERWICK DOWN A303 ROAD SCHEME UPDATE – Carolyn MacDougall

James expressed a warning about online frauds regarding deliveries (royal mail/dpd etc) that were unable to be left at the door. The scammers encouraged contact in order to get payment for the proposed delivery and /or bank details. He emphasised the point that scammers are making the most of situations such as lockdown and there are numerous new scams being developed all the time, all suspicious contacts should be regarded with the utmost caution and genuine agencies will never ask for bank details or pin numbers.

Bill supplied a government email address to which one can forward fraudulent to it is: report@phishing.gov.uk

The new gates at the top and bottom of the private road running through Druids estate were mentioned. It was suggested that they had been closed to discourage hare coursing. Peter Day said they were also to discourage that road being used as a “rat run” which had become a problem over recent time.

Carolyn said that the South West Ambulance Service (SWAS) had said that the defib was due a service and that the warranty was due to expire in Feb 2021. The village now had 2 possible options for the upkeep of the defib –

The general feeling of the meeting was that the best and most cost effective option was to bring the defib under the ownership of the village and that a spend of £100 from village funds be authorised to purchase replacement pads - proposed by Charlie Street and seconded by Keith Lovett – general vote + 100%.

Ideas for the village during lockdown:

A number of ideas to keep the village and entertained during lock down and the following was agreed:

Sarah mentioned that a ‘surviving winter’ fund was available to provide a £250 grant for anyone in receipt of  universal credit/income support or pension credits which can be put towards energy bills, Sarah will circulate an email with all details and post a note through letterboxes for those not online.

Bill mentioned that Paula Rapley and her daughter had been collecting litter from the hedgerows along Berwick Road and he felt a thank you may be in order and possibly the village should invest in some ‘litter collector sticks/tools’ so that those in the village prepared to help could do so – general vote 100%.

The date of the next meeting is still TBA.

There being no other business the meeting closed at approximately 8.30pm.

Co -Chairs of the Village Meeting.