The 7th (Airborne) Battalion of the King's Own Scottish Borderers had moved from Scapa Flow in the Orkney Islands to Woodhall Spa in Lincolnshire in November 1943 in preparation for airborne conversion using gliders as a means of rapid transport. In early 1944, numerous training exercises were being undertaken in preparation for the Allied invasion of north-western Europe that year.

On the 4th April 1944, 1 HGSU, Horsa 1 glider, LG999 towed by Stirling IV LJ-842 of 196 Squadron took part in a large-scale glider exercise (code named 'Exercise Dreme'.) Airborne from RAF Keevil, Trowbridge, Wiltshire, the cross-country night exercise of various legs was to take 3.5 hours and the gliders were to be released over Brize Norton in Oxfordshire. The glider occupants were two glider pilots and members of No. 3 Platoon, 'A' Company, 7th (Airborne) Division, King's Own Scottish Borderers.

Low cloud was reported in the Lewis area and on the leg from Lewis to Winchester, this being wartime it would have been extremely dark below the cloud and unfortunately, as the towing aircraft descended through cloud, it hit a tree. The glider released immediately and crashed in Warnford. All 27 men onboard Horsa LG999 were killed. The Stirling flew on for another 15 minutes when it stalled, possibly due to a failure of the port outer engine and crashed at 21:00 hours one-mile south-west from Romsey, some 18 miles from the site of the glider crash and all six crew members were killed.

Passengers: All served with No. 3 Platoon 'A' Company, 7th (Airborne) Battalion, King's Own Scottish Borderers,

On 04 April 1944,  33 servicemen were killed during an airborne forces exercise.  27 of these died when their Horsa Glider crashed in Warnford Park and the other 6 in the Stirling IV ‘tug’ aircraft that crashed near Romsey.

78 years later, on 04 April 2022, the Rector will lead a service of remembrance on the site of a new Sussex Sandstone memorial to honour them.

Veterans and serving personnel will lay wreaths, names will be read by children from ……. and the service will be supported by a bugler and a piper …

In 1943 the 7th Battalion, King's Own Scottish Borderers (KOSB) was converted to the Airborne Infantry role, utilizing gliders.  The Battalion was part of the 1st Airlanding Brigade within the 1st Airborne Division.  Through 1943 and 1944 exercises took place to prepare the 1st and 6th Airborne Divisions for parachute and glider borne operations in support of D-Day and subsequent operations in NW Europe.

On the night of 4th April 1944, the Battalion was part of Exercise ‘Dreme’.  This was a large glider borne exercise in which the gliders with their Stirling IV ‘tugs’ conducted a circuit from RAF Keevil in Wiltshire to East Sussex and returning to release their gliders over RAF Brize Norton in Oxfordshire.  This route took the aircraft over East Meon and Warnford on the return leg. Stirling IV LJ-842 of No 196 Squadron RAF was towing 1 HGSU, Horsa glider, LG999 containing the two glider pilots and members of No. 3 Platoon, A Company, 7th (Airborne) Battalion, King's Own Scottish Borderers.

The night was very dark and with low cloud forcing the pilots to fly low and with no ambient light as the blackout was in force.  Tragically the Stirling struck a tree to the East of Warnford Park. The Horsa Glider crashed in the fields of Warnford Park killing all 27 soldiers on board.  The Stirling flew on with catastrophic damage and crashed near Romsey; also killing all 6 of the RAFVR & RAAF aircrew.

On 04 April 2022 an event will be held beside the South Downs Way between Exton and Old Winchester Hill, a site which provides a panoramic view of the flight path and Horsa crash site,  to bless a memorial stone and remember those who lost their lives in this fatal air crash in which 33 young men died.  Maj Will Pike PARA (retd) said  “This reminds us all of the ultimate sacrifice that so many paid, on our behalf,  in the two world wars and conflicts since as well as the role the ‘South Downs’ and its communities played in the run up to D-Day”.

The event will take the form of a service of dedication, blessing and remembrance running from 10.30-12AM on 04 April 2022.  It is open for all who wish to attend.

The poster shows the location of the memorial beside the South Downs Way which is between Meonstoke and Old Winchester Hill (The site can be found using the What3Words app… the three words being letter.equity.revolts) 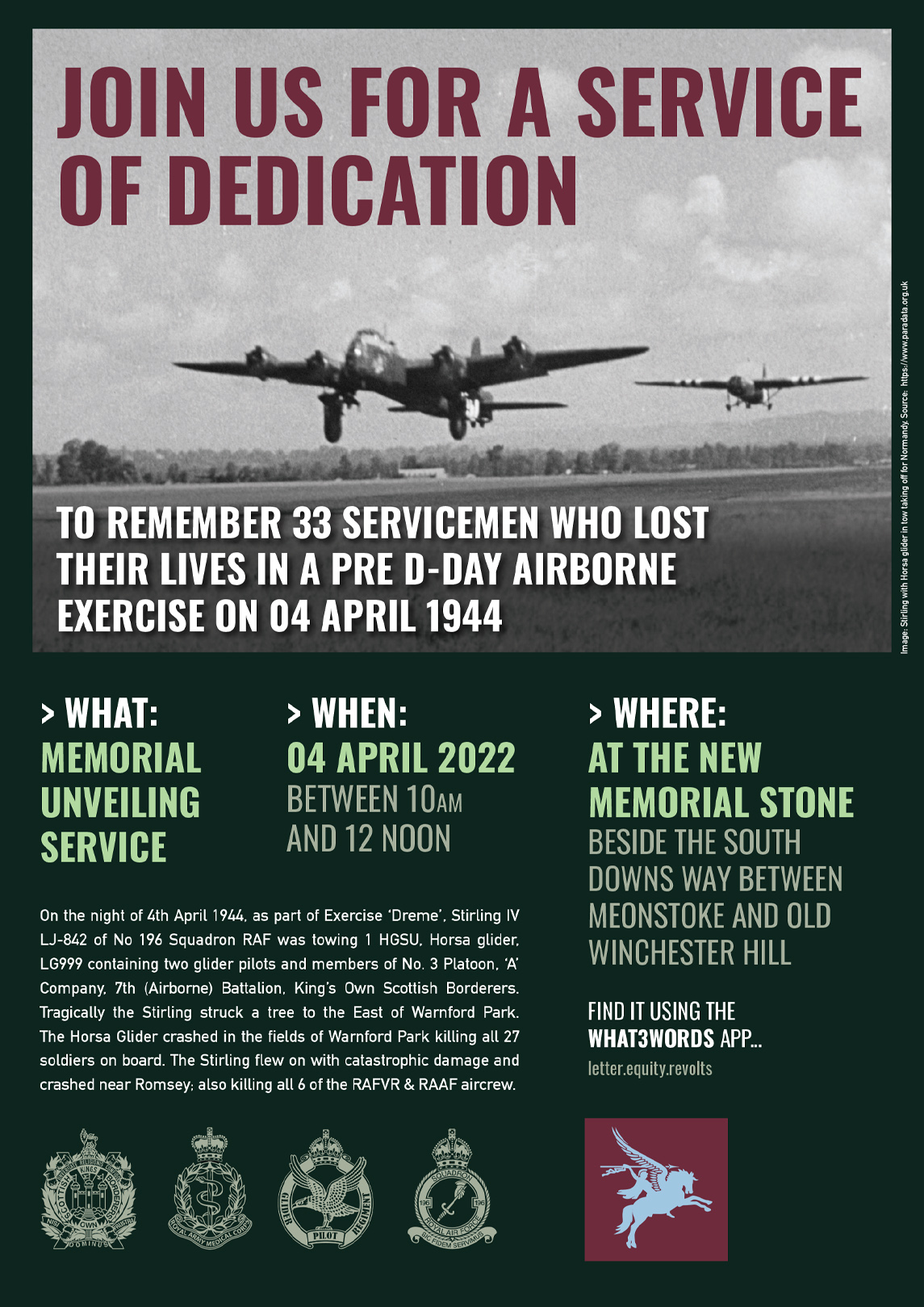