Against the east wall of Warnford Church are set two fine altar tombs, on the north side of William Neale (d.1601) and at the south side a more elaborate monument to his son Sir Thomas Neale (d.1621) containing his effigy and those of his two wives. They are of alabaster in the style of Classic Renascence which was very evident in such memorials in the reigns of Queen Elizabeth and her successor.

The Neales bought the Warnford Estate in 1577 and owned it until 1678. The Old House to the east of Warnford church was in a ruinous condition, and he began to build a new one to the north. He died in 1601, and is commemorated by the monument on the north side of the altar.

The monument is a fine piece of work; probably of the early “Southwark school” of Gerard Johnson or Janssen: the gadroon or edging pattern on the inscription tablet is characteristic, and so is the strap decoration above. It is built of marble and alabaster; two Corinthian columns support the pediment on which are the arms of the Neales: Argent, a fesse between two crescents in the chief, and a hunting horn in the foot all gules. The arms of his two wives - Agnes daughter of Robert Bowyer of Chichester and Anne daughter of William Blande and widow of Richard Culverwell - are on the canopy, very much smaller. William was a man of substance; a churchwarden of St. Bartholemew’s, one of Queen Elizabeth’s Auditors of the Exchequer, and tenant of land at East Meon, Cranbourne and Fremington in Devon. None of his six children appears on the monument which carries the inscription:

The epitaph of a disillusioned man: “What is flesh? What is this life? Blossom, Dust and Shadow.” 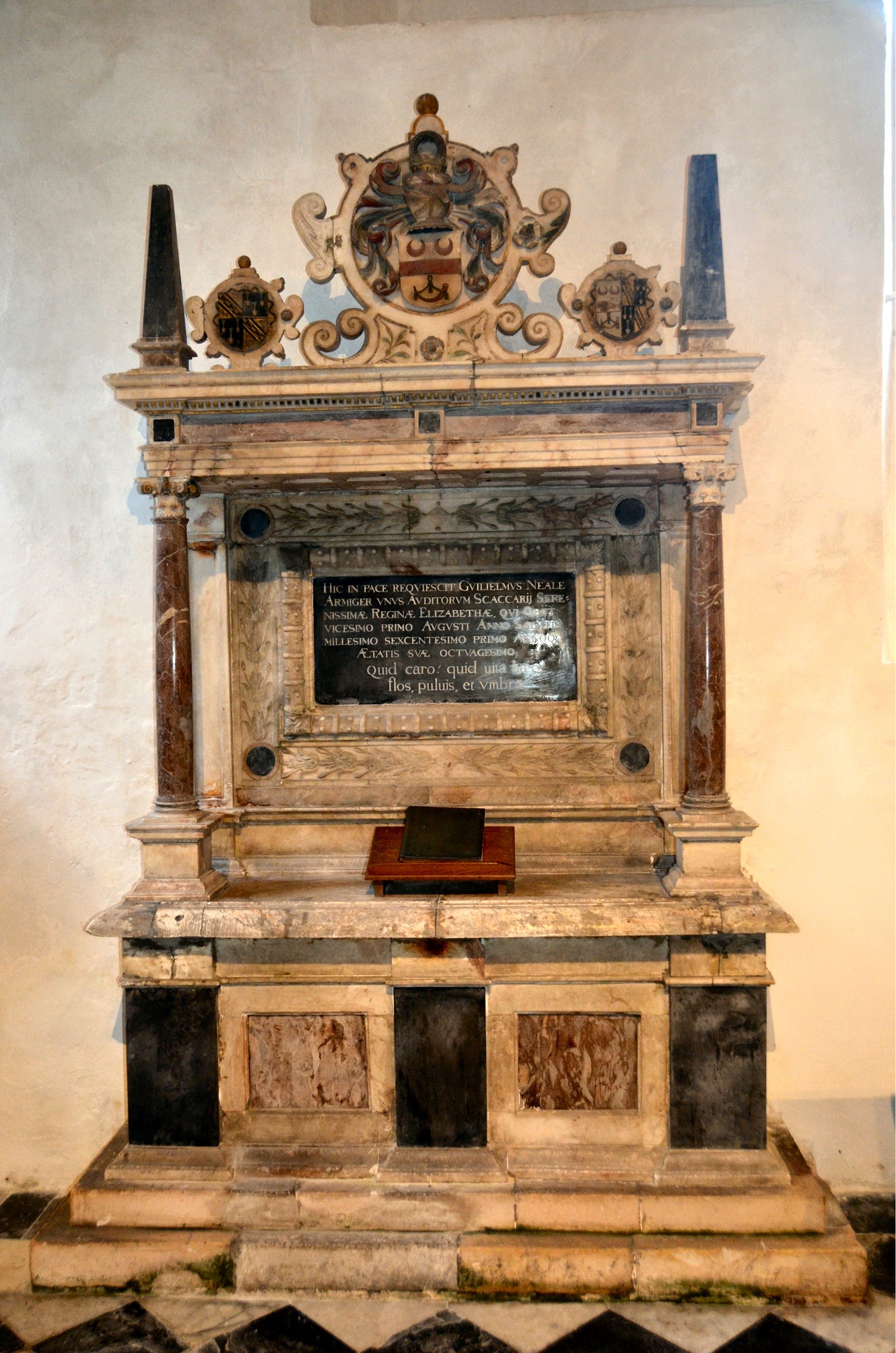 The monument on the south side of the altar for Sir Thomas Neale, Auditor of the Exchequer under Queen Elizabeth I and James I (the equivalent of the Chancellor of the Exchequer), is the finer of the two - probably of the late Southwark school. It was carefully restored in 1926/7. 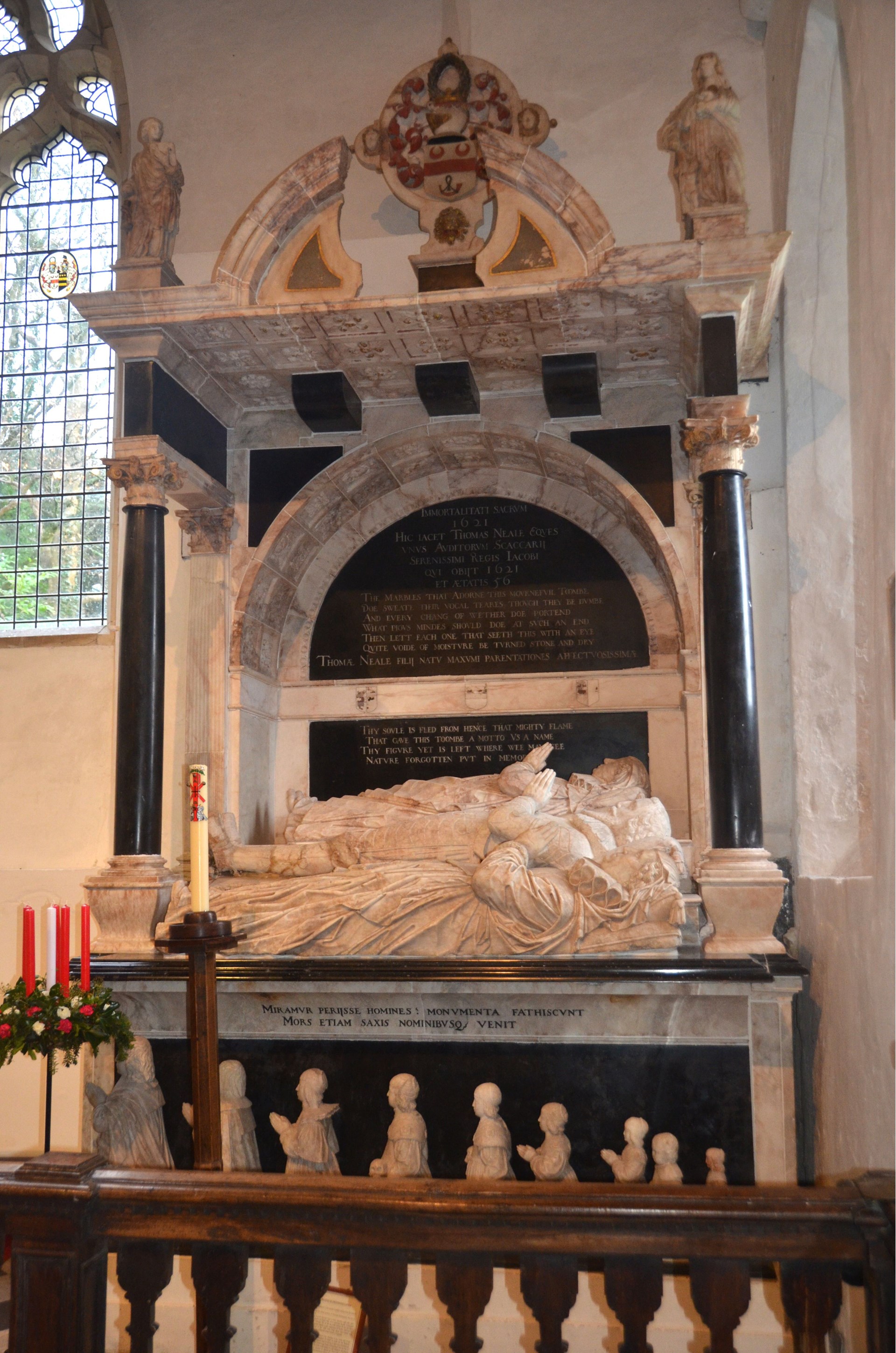 William Neale’s eldest son, Sir Thomas, died in the parish of St. Clement Dane on September 18th 1620, and was buried at Warnford on February 3rd 1621. He lies in full armour beneath the panelled alabaster canopy with a broken pediment upon which are the Neale arms between the figures of Faith and Charity. On his right, against the east wall of the chancel, is the figure of his first wife, Elizabeth, who gave her husband five daughters..) It was a disappointment to Sir Thomas that no son was born; and within a year of Elizabeth’s burial at Warnford, he married again. This wife, Mary, lies on Sir Thomas’s left; and she produced four sons and one daughter.

Below the recumbent figures is a row of nine of their children, with those who died in infancy carrying a skull. 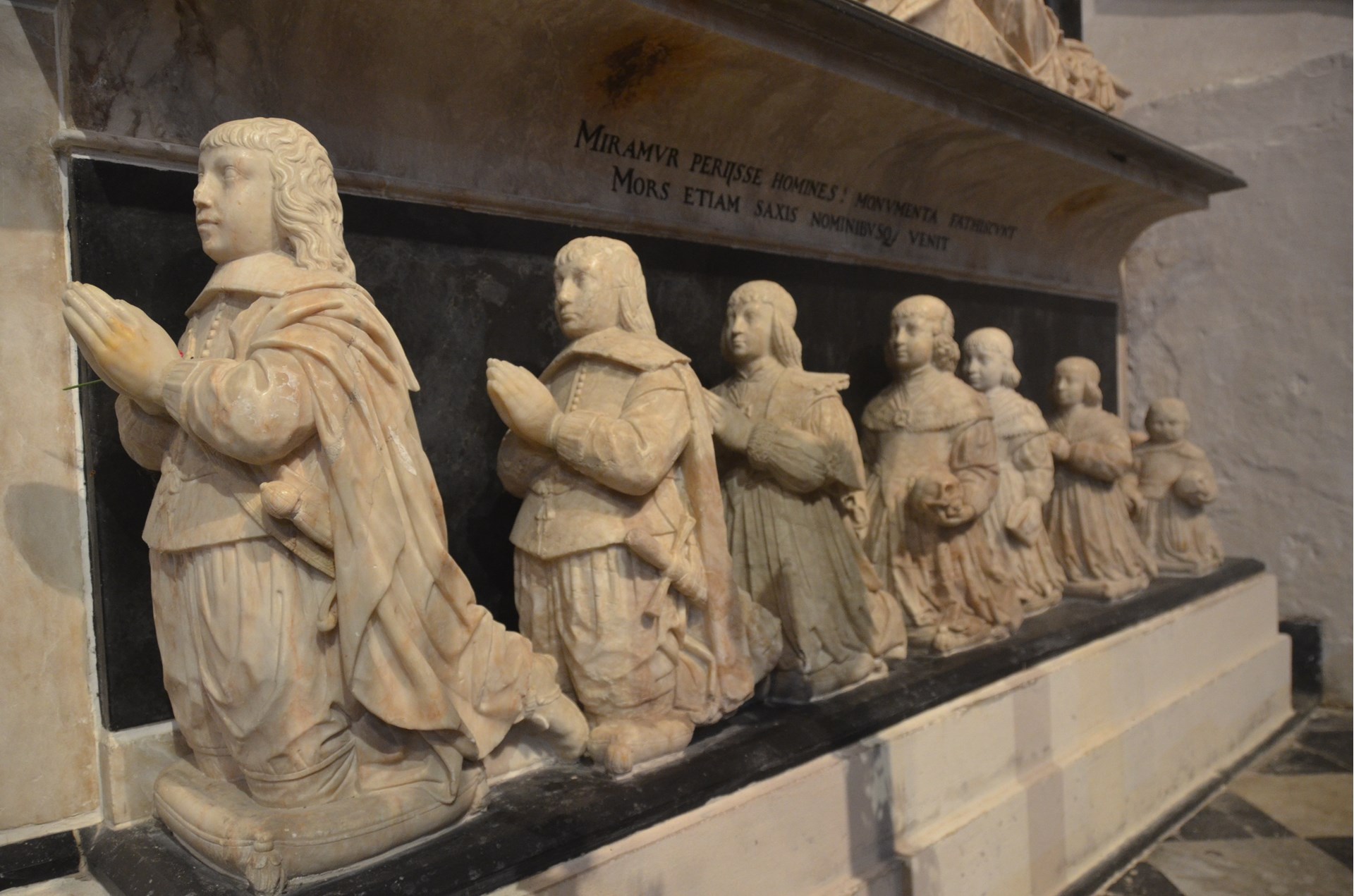