There is no documentary evidence of the Saxon foundation of Warnford Church, with its earliest mention dating to the Domesday book. There is a strong local tradition which connects the Meon Valley with Wilfrid, Bishop of York and founder of Hexham and Ripon. He spent five years, AD. 681-686, among the South and West Saxons after a journey to Rome, when his return to Northumbria was not possible. Venerable Bede writes that Wilfrid preached in the Isle of Wight and the province of the Meonwara (Eccles History, Bk. IV, Ch. VIII) and although Bede was writing in Jarrow, he was well informed about ecclesiastical affairs in the south of England, through his friend Nothelm, Bishop of London, afterwards Archbishop of York. Bede was interested in the career of Wilfrid, a Northumbrian.

It is likely that there was first a church of wattle and daub but there are no traces of that today. There is considerable evidence of a later Saxon stone church. To summarize these:

(1) H. M. and J. Taylor published a careful survey of the present building in their Anglo-Saxon Architecture (2 vols., 1965) and consider that the quoins on the east wall of the tower (the dressed stones at the angle of a building), are evidence of the construction of the tower against a narrower nave; the marks of the side walls and gabled roof of this nave were noted on the east wall of the tower as evidence of the west wall of a pre-Conquest Saxon building. These can be seen in the photograph. Also shown in the photograph is masonry above the tower arch and the inverted “V” of the drip stone. 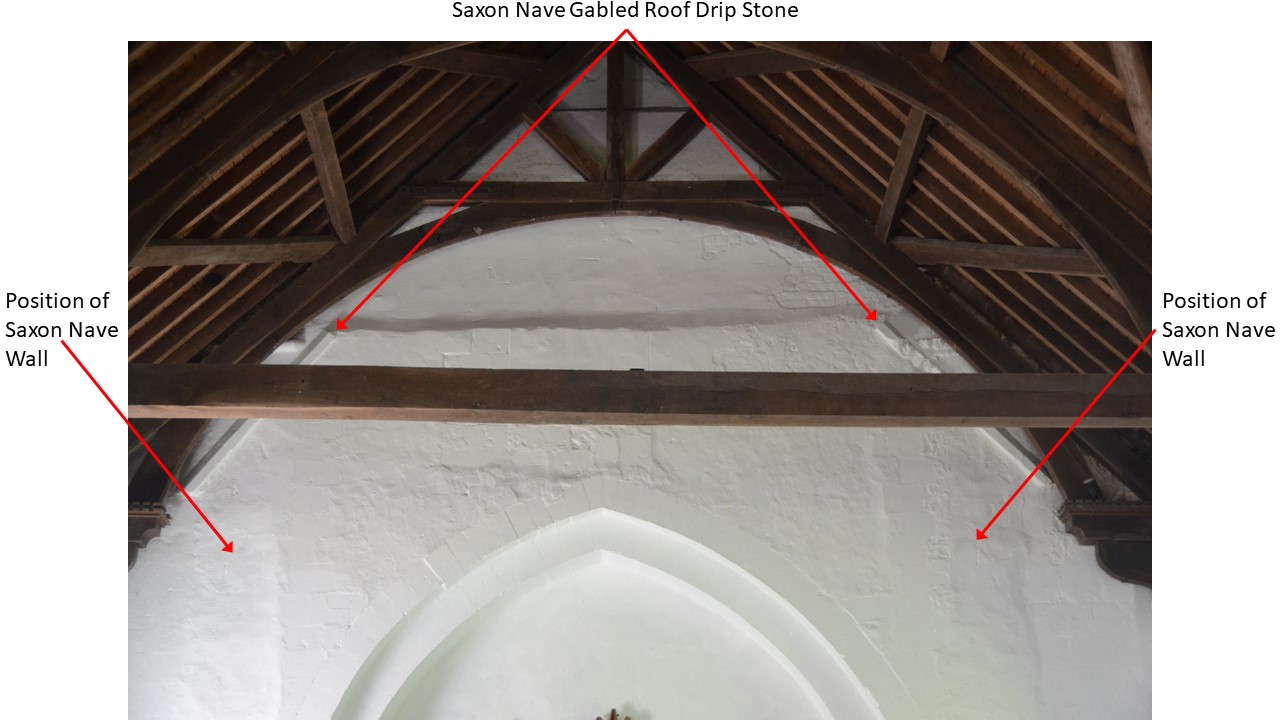 The breadth of this building was discovered during the restoration of the fabric of the church in 1906, when the floor of the nave was taken up and two Saxon  wall footings, 2ft. 6in. thick, and 6-7 feet within the present north and south walls, were found: and these ran straight up the nave to the line of the screen. The floor of the chancel was not taken up in 1906, so that the length of the pre-Conquest church was not known at that time. 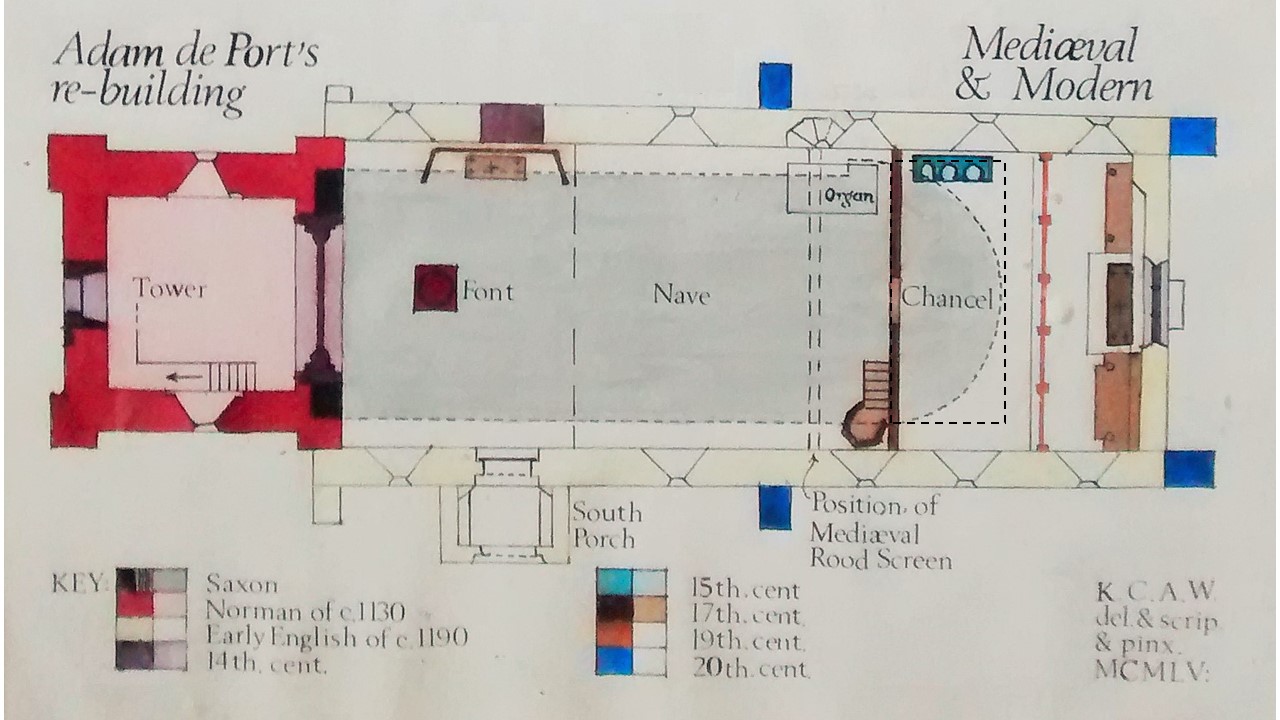 (2) the sundial in the south porch (c.f. section on this porch) which is much too elaborate for the wattle and daub period, but is unquestionably pre-Conquest. 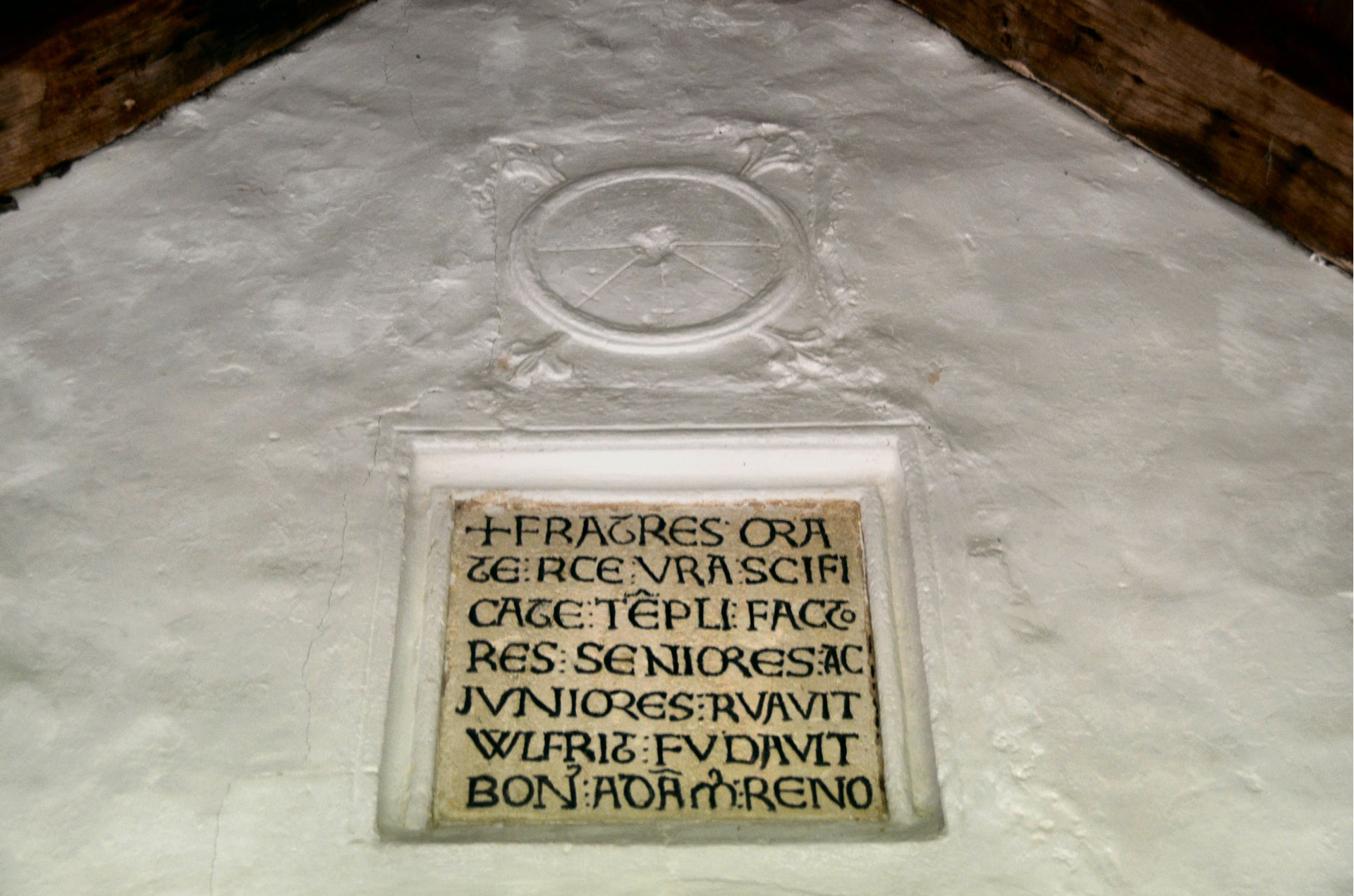 The Saxon Sundial in the South Porch