The earliest reference to the new house in Warnford Park is in the Will of Anne Neale made in August 1597. She was the second wife of William Neale who bought the Warnford manor in 1577. In leaving a number of legacies to various people in Warnford she says ‘to the two maides in the new house and to the three poore women who shall winde me up, to everie of them tenn shillinges.’

This was the ‘new’ house as distinct from the ‘old’ or King Johns House east of the Church, which was documented as being neglected and ruinous in 1577.

The Neale house was not much lived in after l646 and the families time there came to an end in 1678 when the estate was sold to the Wollaston family, the property was noted as being waste and the house untenanted in 1679. The Estate passed through a number of hands – it was purchased by the Silvesters and inherited by the Bouverie family until being purchased by the 11th Earl of Clanricarde in 1754 after they had been tenants for some years.

The house from their time can be seen below from a sketch in 1819. This illustration shows a mansion with two projecting wings. The wings are three bays deep and the main entrance is on the north façade. This Georgian style mansion illustrated below was likely to have been built in a symmetrical style with two projecting wings on the style of the western one. It was a new build, with the original Neale house attached to the 18th C Mansion behind the western wing, forming the western boundary of a south court. The east wing, facing the park and walk leading to the Hermitage Garden was raised and refaced later by the Clanricardes. It is likely that the south court was a service area at this time. This is shown on an estate plan of 1811, the drive to the house then coming in straight opposite the Rectory gate and across the river at the water wheel. The Clanricardes were also responsible for the terrace, bath house, the bathing pool, the ‘Memento Mori’ bridge, grotto (hermitage), garden and pleasure grounds. The gardens and pleasure grounds were laid out by Capability Brown. 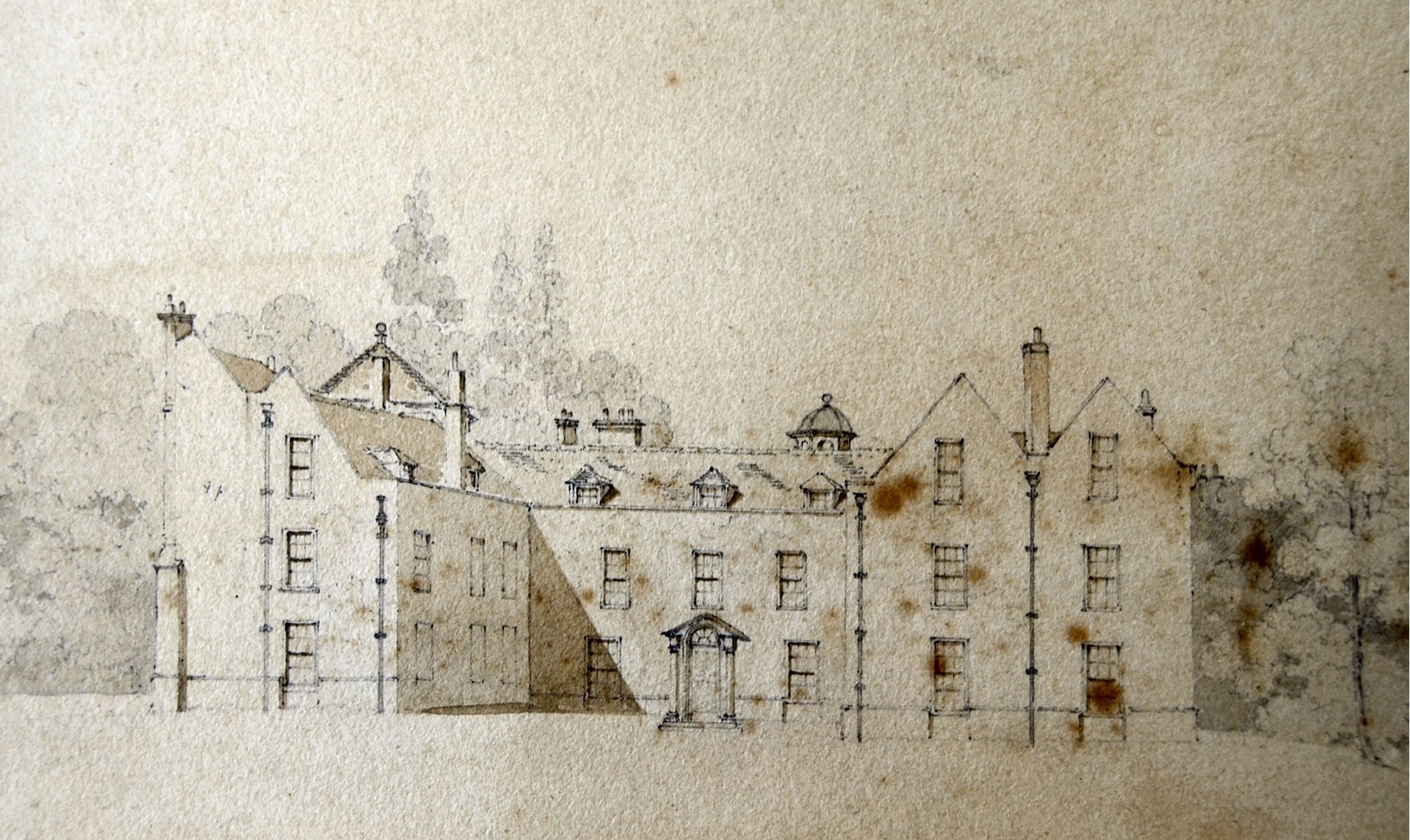 Lancelot ‘Capability’ Brown notes a journey (undated) to the `The Earl of Clanricarde’ (Stroud 1975), and it appears that the Earl consulted Brown over improvements to the landscape, Brown's foreman, Spyers, being responsible for a survey. A letter exists from the Earl to Brown of 13 April 1773, asking if he, Brown, can arrange for Lord and Lady Wandesford to have a 'view of Kew Gardens' (Stroud 1975). A description in the Morning Post of 29 September 1789 implies that the lake and pleasure grounds were completed by the time of the death of the eleventh Earl in 1782.

An 18th century bath house (also called The Dower House) was also built at this time to a design by Capability Brown in the Strawberry Hill Gothic style. This Dower House or Lady Mary's Bath House, dates from the late 18th C and sits centrally on the south side of the pleasure grounds, astride the formal channelled watercourse (now dry). This gothic garden pavilion is built on a raised terrace, commanding views across the southern park, previously called Cowley's Meadow. The remains of a pool for bathing were found in the basement when the building was renovated to form a dwelling (1980s).

William Abbott purchased the estate in 1826, selling it on in 1846 to Edward Tunno. By 1839 the park was quite wooded and views show an updated mansion sitting in a Brownian-style landscape park with the River Meon forming a lake to the south of the mansion.

By this time the Georgian mansion had been extensively remodelled, and the main entrance moved to the south courtyard. The carriage approach passed under an arched gateway into a spacious courtyard to the south front of the mansion, which is surmounted by a cupola and clock. The north facade of the mansion had been extended, infilling between the two wings, the windows regularised, walls rendered and the rooflines remodelled. The mansion now looked much closer in appearance to the mansion as it existed at the end of its life.

Also to be seen is the east façade. This was the Clanricarde improvements to the east wing of the house and shows the slightly higher three storey feature with a pyramidal roof and a Venetian window on the first floor. 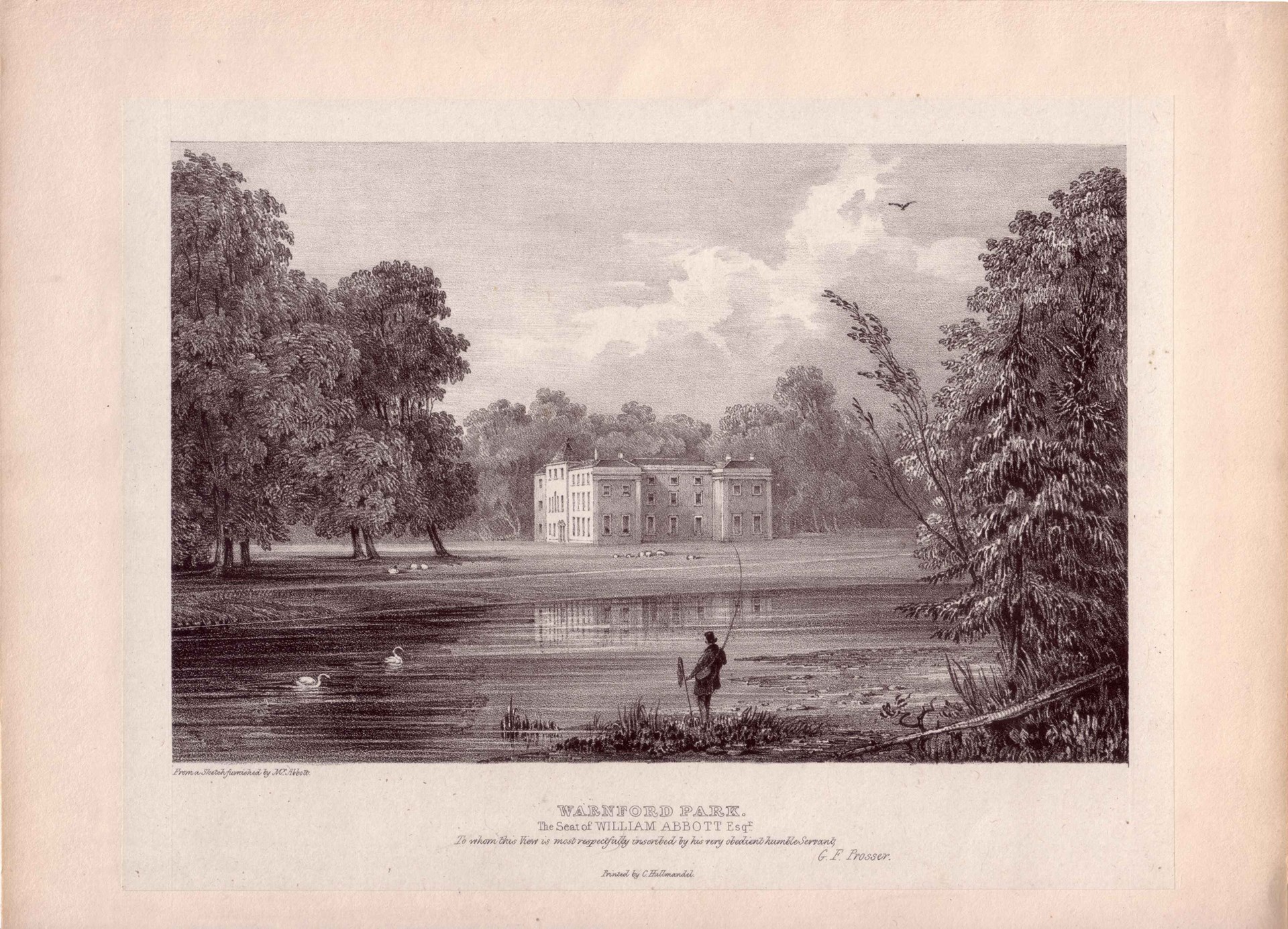 A description of the main rooms exists from 1833 (Prosser);

“It is entered by an Ionic porch and vestibule opening to the Hall, which is forty feet by twenty-one, ornamented towards each end by two Ionic columns carved in wood. A broad staircase of oak rises from this apartment; each baluster is a small carved column of the Ionic order, and the piers are surmounted with carved baskets of fruit and flowers. The walls of the landing and ceiling are also decorated with carving.

The offices form the west side of the entrance court [in the original Neale House]; at the north end of which is another arched gateway leading to the stables, kitchen-garden, etc”

Tunno was responsible for major alterations, including laying out a new approach to the mansion from the Portsmouth Road which swept over a new bridge across the river (the current access route) and through a ‘Roman arch’ to make a more imposing approach to the house.

In 1867 the estate was purchased by Henry Woods, colliery owner and MP for Wigan, who carried out further alterations to the house, including a formal sunken Italian garden to the east of the house and considerable ornamental planting in the pleasure grounds. A new walled kitchen garden with extensive glasshouses and service buildings behind its north wall was built on the site of the old Hermitage Glade. A great deal of planting was undertaken in the park and views were opened up so that Beacon Hill was visible from the house.

Henry Woods completed the east wing, adding the rooms behind the drawing room, the library, and the conservatory. When all this was done it must have been a very odd looking house, a conglomeration of shapes and styles, so Henry Woods set to work and refaced the east, north and west facades of the whole house in a symmetrical facade, leaving the servants’ quarters stuck out behind. Woods also added beyond the Roman arch, and built North lodge and one opposite the Rectory gate.

The mansion was at its peak by this time, containing by 1935 six reception rooms, a billiards room, sixteen principal and secondary bedrooms, ten servants bedrooms, three bathrooms and full central heating.

The Woods family sold the estate in 1935, the park remaining in the ownership of the Chester family. During the Second World War Warnford Park was occupied by the military. In 1958, following a long period of decline, the house was demolished. Four images of this house can be seen above from before it was demolished. Some idea of the interior can also be seen in this image below. 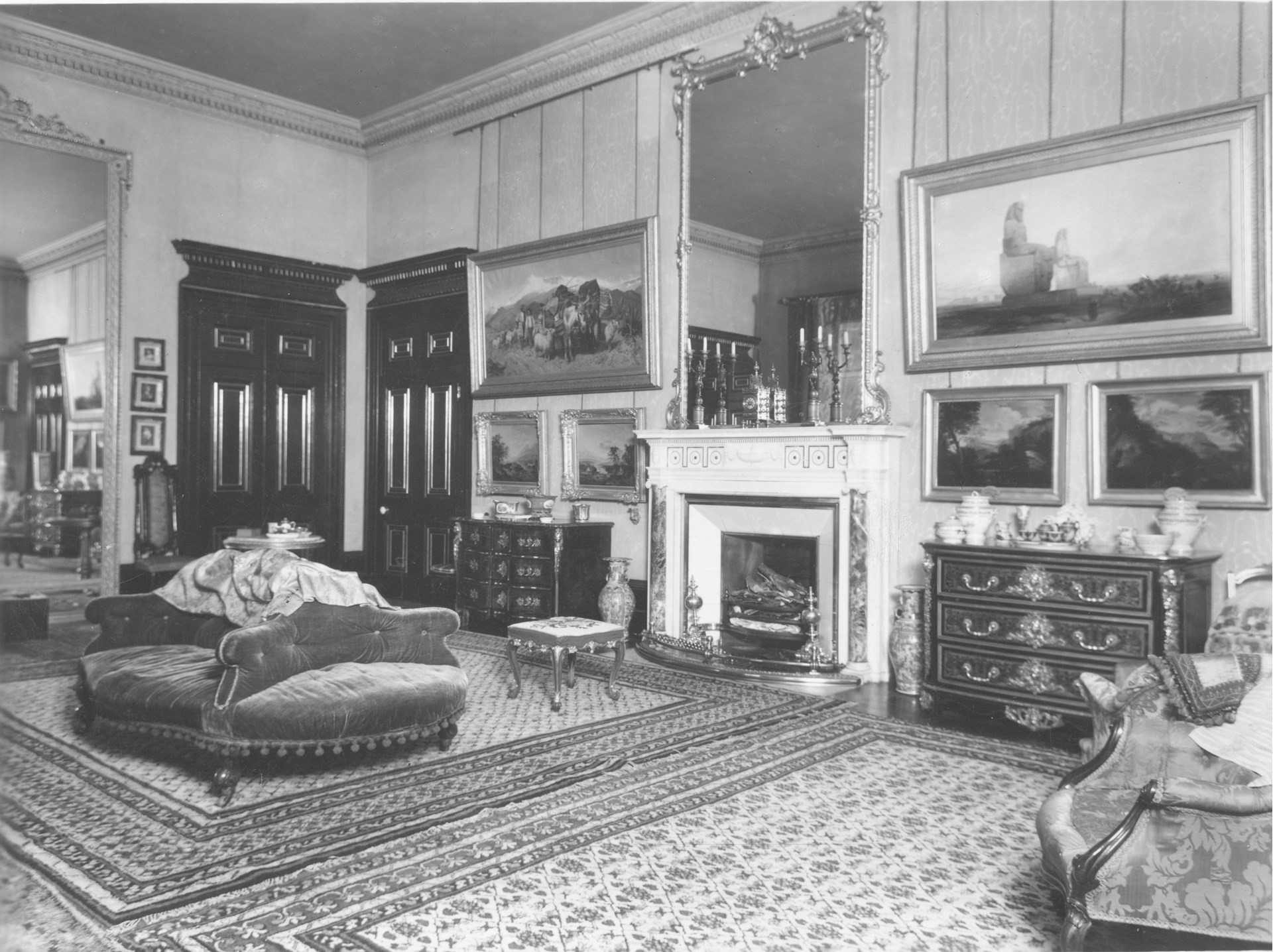