The origins of the Park in its present form dates to the 18thC when in 1754, the estate was purchased by eleventh Earl of Clanricarde.

At this time, the park was remodelled by Lancelot ‘Capability’ Brown. Capability Brown notes a journey (undated) to the `The Earl of Clanricarde’ (Stroud 1975), and it appears that the Earl consulted Brown over improvements to the landscape, Brown's foreman, Spyers, being responsible for a survey in 1773. A letter exists from the Earl to Brown of 13 April 1773, asking if he, Brown, can arrange for Lord and Lady Wandesford to have a 'view of Kew Gardens' (Stroud 1975). A description in the Morning Post of 29 September 1789 implies that the lake and pleasure grounds were completed by the time of the death of the eleventh Earl in 1782. What made this Capability Brown park possible was the diversion of the A32 between 1757 and 1773 west to its present alignment.

The local story attributes this move to the lady of the manor wanting more privacy. Though unverified, there is an element of truth in this version of events. The course of the new road swept to the west around Warnford Park, isolating it from passing gaze. In order to take full advantage of this opportunity for privacy, any peasant homes within the park would need to go.

An estate map of 1811 shows that the River Meon was diverted as it entered the park and a long tear-shaped lake was created in a loop, and the river’s exit from the park was arranged via a series of sluices. A walk was created encompassing a sequence of garden buildings including a grotto, a hermitage and a bath-house, the design of which closely resembles an unexecuted Brown design for a lakeside pavilion at Rothley, Northumberland. The old hall, King John’s House, was also deliberately incorporated into the landscape design as a “scenic ruin”.

By 1839 the park was quite wooded and views show the mansion sitting in a Brownian-style landscape park with the River Meon forming a lake beside the mansion. Tunno was responsible for alterations to the park at this time, laying out a new approach to the mansion from the Portsmouth Road (the current access) which swept over a bridge across the river – removing the old driveways. It is also known that he diverted the water in the park in 1836, and it is assessed this was when he remodelled the north end of the lake to its present format to combat the extensive flooding of the mansion that was noted in the early 19thC.

In 1865 the estate was purchased by Henry Woods, who carried out further alterations, including a formal sunken Italian garden to the east of the house and considerable ornamental planting in the pleasure grounds. A great deal of planting was undertaken in the park and views were opened up so that Beacon Hill was visible from the house.

The former main entrance to the site lies at the north-west corner of the park in Warnford village, some 80m west of Warnford Bridge. Here the entrance leads through an ornamental gateway set with gate piers and gates, the piers dressed with square-knapped flints and crowned with carved stone vases.

To the south of the former main entrance stands North Lodge, a Tudor-style lodge with a gothic porch and ornamental bargeboards. From here the drive led southwards, running within the wooded perimeter belt which screens the public road to the west and the River Meon to the east. The drive passed the now empty site of Middle Lodge screened to its west, where the current main entrance now joins it, before curving round eastwards to cross the river via a bridge to arrive at the site of the west front of the house where now only the house platform remains. The route leads to the main entrance to the mansion in the south courtyard via a ‘Roman arch’ at the extreme west of the west wing to make a more imposing approach to the house.

This evolution of the Park can be seen below in an 1870 plan. 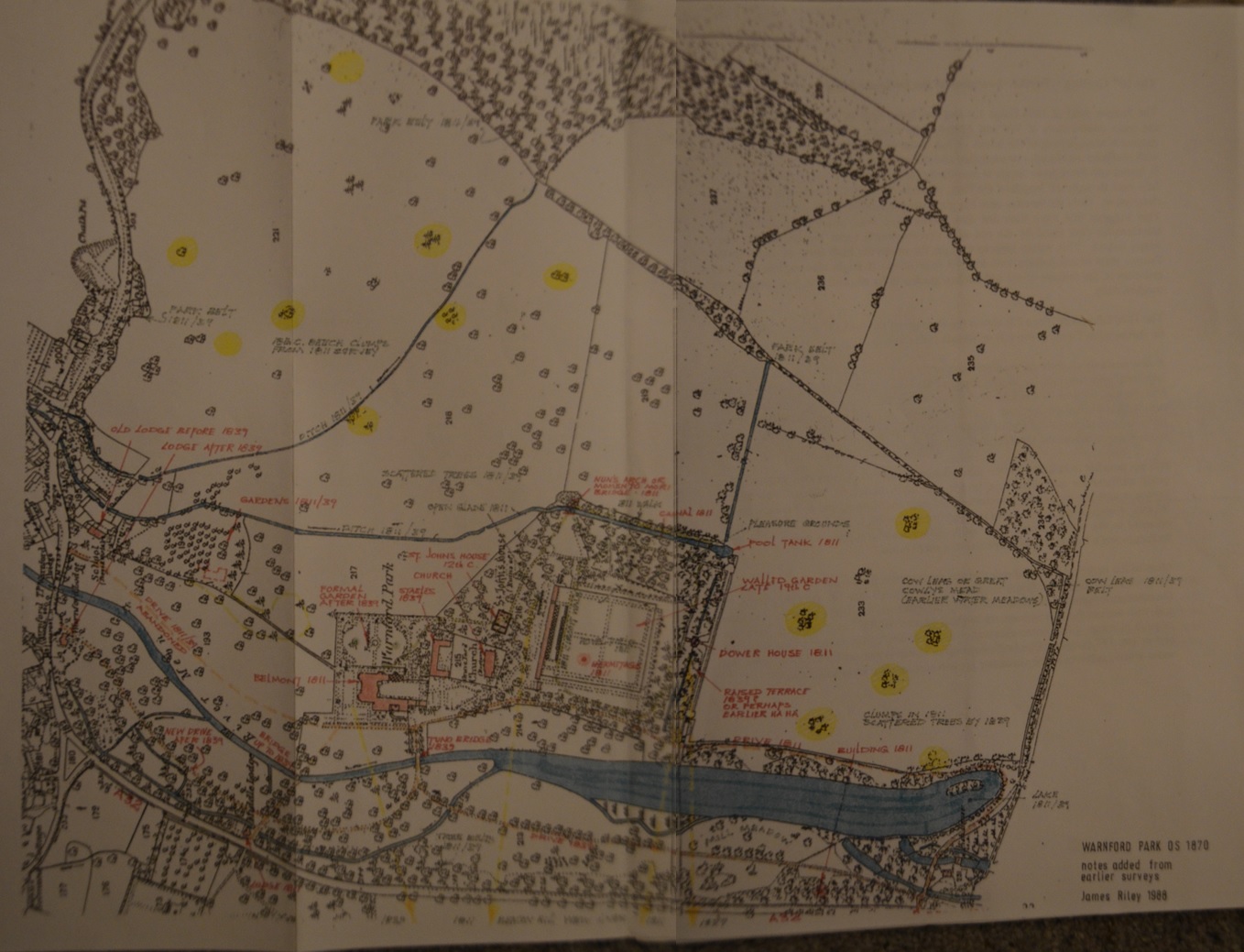 This drive was laid out between 1839 and 1870. Prior to this, the main approach led into the park from some 80m east of Warnford Bridge, by a lodge (now the site of Manor Farm), and ran south alongside the river, on its east bank and on the line of the old Portsmouth Road. The drive continued south of the mansion to lead around the southern end of the lake to the south-west gate.

The empty site of the Middle Lodge stands midway along the western park boundary on the A32. Originally one of the main entrances to the park, it dates to the relocation of the main Portsmouth Road and provided an entrance directly off the main road, running for a short distance over the river to the west front of the house.

To the east of the house site and north of the parish church was the Italian garden, a sunken square compartment with a central fountain.

South of this stands the parish church within a brick-walled enclosure, and the remains of King John's House. King John's House was “slighted” in the mid C18, in order to incorporate the ruins as a feature of the pleasure grounds. The encircling plantation was designed to reveal the ruins of St John's, and perhaps also a view of the parish church.

The pleasure grounds lie to the south of the church and consist of a walk laid through a broad woodland belt which encircles the brick-walled kitchen garden. Prior to the construction of the walled garden by Henry Woods, the walk led through light woodland and formed a ring around an open rectangular paddock some 120m x 60m called 'Hovel Field', within which stood a Hermitage and waxwork hermit.

From King John's House a path leads south-eastwards to the late C18 Momento Mori bridge, a flint-faced arch with flanking walls which stands at the north-east corner of the pleasure grounds. The pleasure grounds are divided from the east park by a canalised stream (now dry). A path leads under the bridge to offer views across the park from the park side of the canal. The canal leads southwards, with a formal walk alongside it on its eastern (parkward) side, and then issues into a flint-lined pool situated at its southern end. From this pool the water was then channelled underground for approximately 30m before continuing at right angles to flow westwards as a formal channelled watercourse to feed the Bath House. 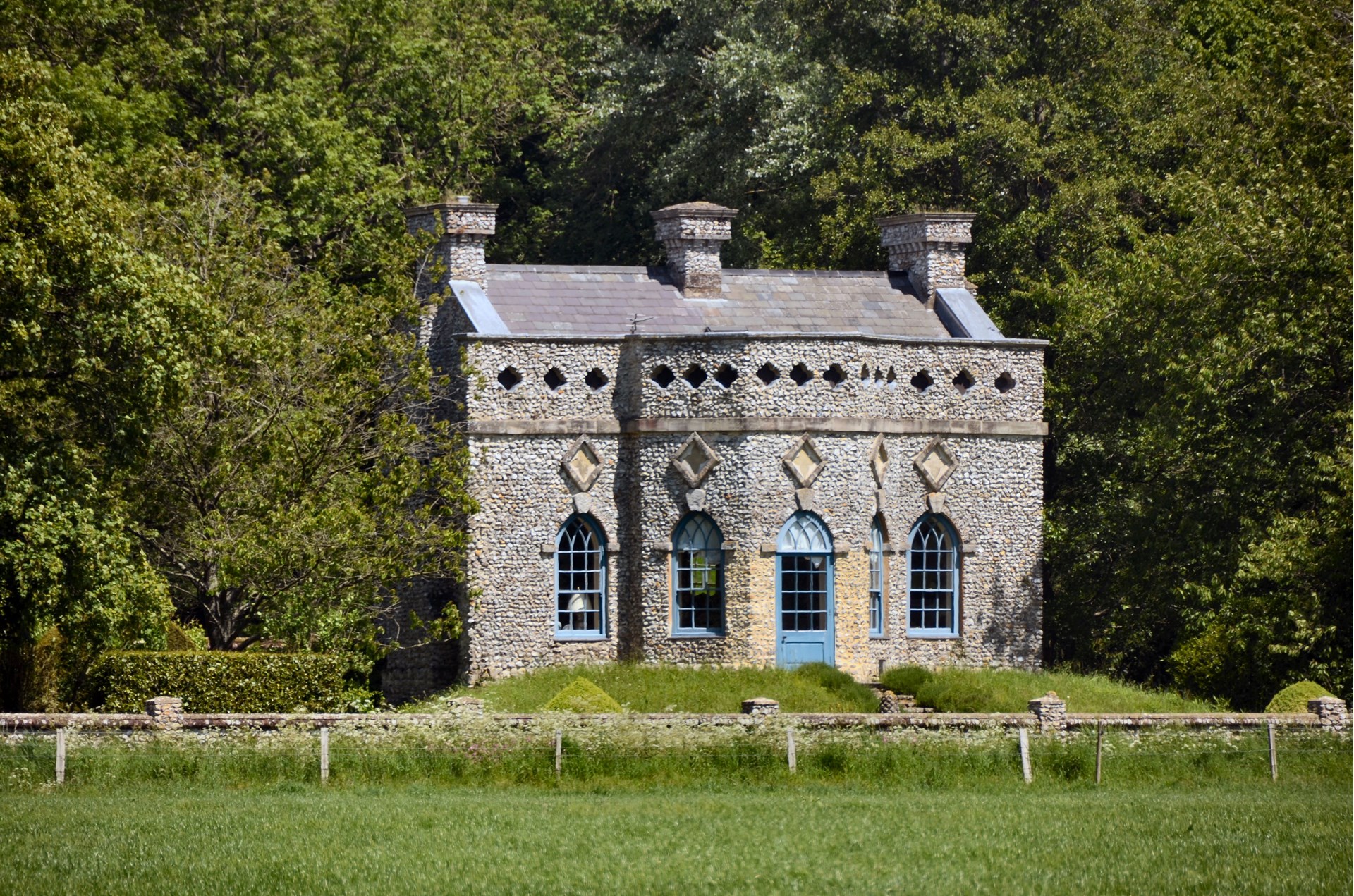 The late C18 Bath House, also known as the Dower House or Lady Mary’s Bath House, sits centrally on the south side of the pleasure grounds, astride the formal channelled watercourse (now dry).  This gothic garden pavilion is built on a raised terrace, commanding views across the southern park, previously called Cowley's Meadow or Great Cowleys Mead, which in the past was crossed by the earthworks of a water-meadow system.

The formal raised terrace extends some 200m almost due east/west. Originally supporting a raised walk laid out to the south of the Bath House, it was further ornamented and formalised in the early C19 by the addition of a retaining wall on its park side, along its full length. It is built of flintwork with taller piers at intervals along its length. At the west end there is a flight of steps leading down to the approach drive 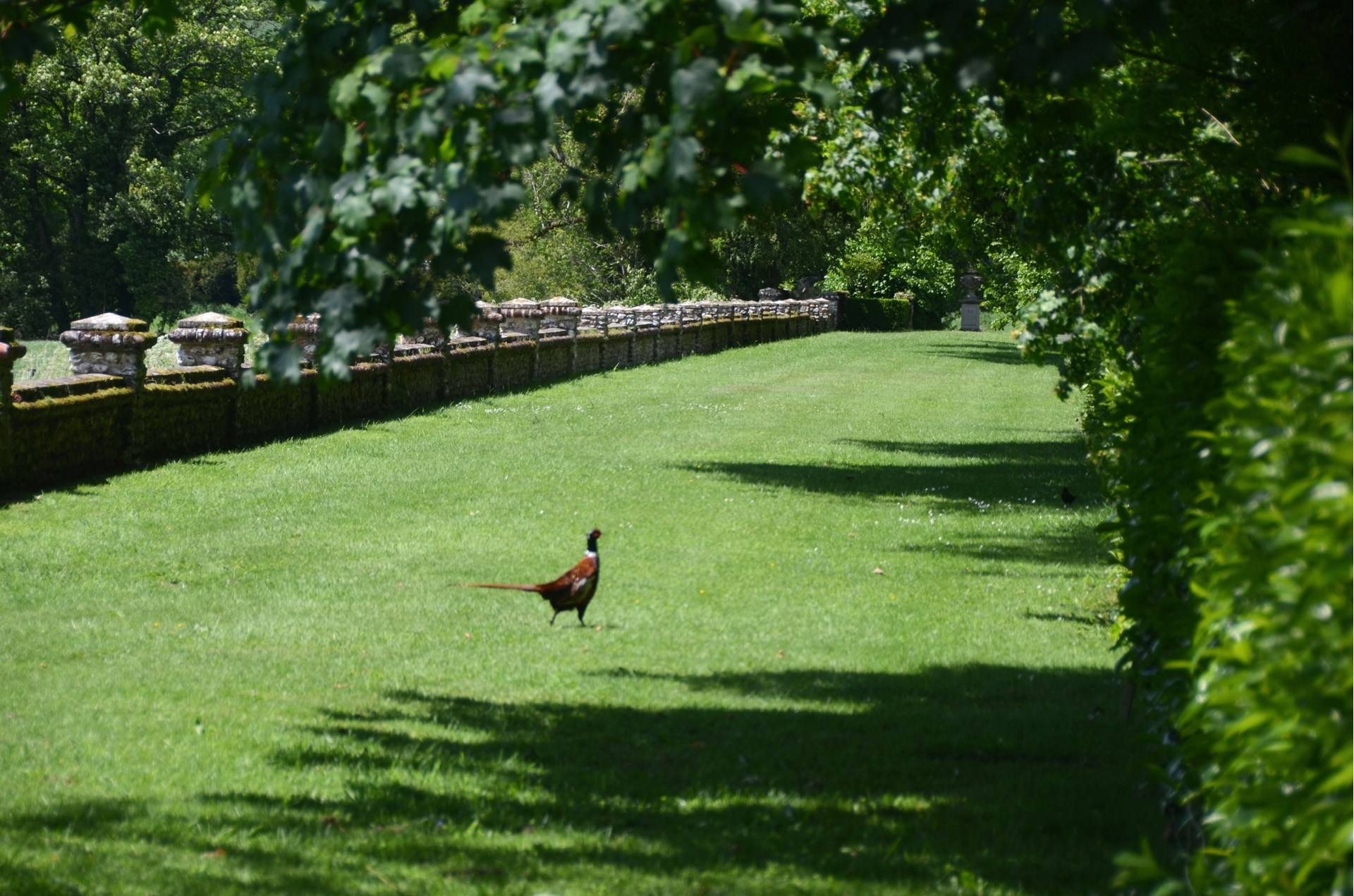