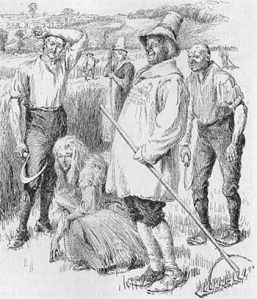 We are lucky that a window can be opened on the life of one of Warnford’s agricultural labourers, Richard Ford.

In 1837, a parliamentary select committee was appointed to examine the functioning of the 1834 Poor Law. As part of their evidence they examined two rural areas, one of which was that encompassed by the Droxford Poor Law Union – a union of parishes formed to provide relief to the poor via a Workhouse. This included Warnford, and Richard Ford was examined in detail and his life recorded for posterity.

He lived in a house supplied by the parish rent free (likely in the garden of High Barn on one of the old poor houses) and worked for John Bailey Sargeant who leased Peak Farm and 464 acres land from William Abbott. Here, he was lucky as typically a labourer would have had to rent a cottage at an extra 1 s to 1 s 6 d a week in Warnford!

The eldest boy (11) worked in the farm, plowing and other summer jobs, earning 1s a week. This was not all year round.

When not pregnant, the wife worked occasionally – but not that year.

He received 2 s for looking after the wife’s daughter from before their marriage.

He bought sufficient flour to make 7 “gallon” loaves, costing in total 8 s 2 d (pence at 12 to the shilling). A gallon of bread weighed 8lbs 11oz (~ 4kg) and would typically feed one adult for 1 week, thus 7 of these loaves would have weighed 60 lbs (27 kgs) and be equivalent to 34 supermarket loaves!

Although not mentioned, from other evidence he would have needed yeast costing ~ 3d.

He bought 8 oz (227g) bacon either once a week or once a fortnight costing 4d– and this typically would have been the fattiest smoked and cured bacon.

He would also sometimes buy potatoes in place of bread. Potatoes in Warnford cost 2 s for 56 lbs (25 kgs).

The rest would have gone on soap, thread, cotton and clothes for the children, and fuel.

Typically the task work income of the year was used for extras. That year it was used for 3 pairs of shoes for the family.

Typical meals from this would have been bread for breakfast, bread or potatoes and a morsel of bacon for dinner, then more bread for supper. It is likely that Richard ate the bacon, as the family depended on his strength, and hence wages. Although not mentioned, I assume that home grown vegetables would have been eaten with dinner – although it is recorded that in other cases this frequently was not so with the poorest not having enough land to grow enough for a family for a year and thus doing without for months on end once their own vegetables ran out.

For clothing, he would have likely worn a smock, waistcoat, breeches, shirt, shoes stockings, hat and a handkerchief. The traditional smock was made of heavy linen or wool and varied from thigh-length to mid-calf length.

He had three beds, two blankets and two sheets for the entire family of 9 people!

It is very unlikely he could read or write as schooling, was most unusual of for labourers until at least 1870. Indeed, at this time there was no school in Warnford, it being founded in 1846 by Edward Tunno, the Owner of Warnford Park. There was no Sunday school, where children were taught to read sufficiently to consult the Bible for themselves.

This must have been a miserable existence, but the Report states that there were many families as badly off as he was in Warnford and twenty out of eighty eight families were noted as being in great distress at that time. Indeed, in the winter of 1820, in one week, thirty nine names appear in the number of recipients of relief among the eighty eight families living in the parish. In that year, poor relief cost the parish £831 16 s 11 ½ d. With the summer being wet, and the winter of 1820 being noticeably cold with deep snow, it was harsh that year. Indeed, Tunbridge Wells in Kent reported a temperature of -23C and the Thames froze as far as Kew in January, with ice floes in the Thames Estuary and shipping disrupted.