The nave and chancel is a single cell design in the simplest Early English style, and was built by Adam de Port in 1190, replacing the Saxon nave and chancel then attached to the Norman tower. The nave and chancel walls are continuous, made of flint with odd bits of brick and clunch. It shows remains of Norman work in the lower half and is buttressed with flint with freestone quoins and, in most cases, tile weatherings. The digging of graves close to the walls in the 17th and 18th centuries accounts for the outward lean of 5 ½ in. on the north side, and 7in. on the south. There is fortunately no sign of recent settlement.

By the beginning of the 20th Century, the church was in a very bad state. Grass grew in the centre aisle; ivy was thick on the outside walls and the gutters were choked; there was not much glass in the windows and the window cills and monuments were covered in moss. Thus in 1905/6 this was taken in hand with a major restoration, detailed here, transforming the Nave much closer to the form we know it now.

The Nave can be seen as it is now, and compared to before 1905 when the nave had a plaster ceiling below the roof beams, at a level which cut two or three feet off the apex of the east window. 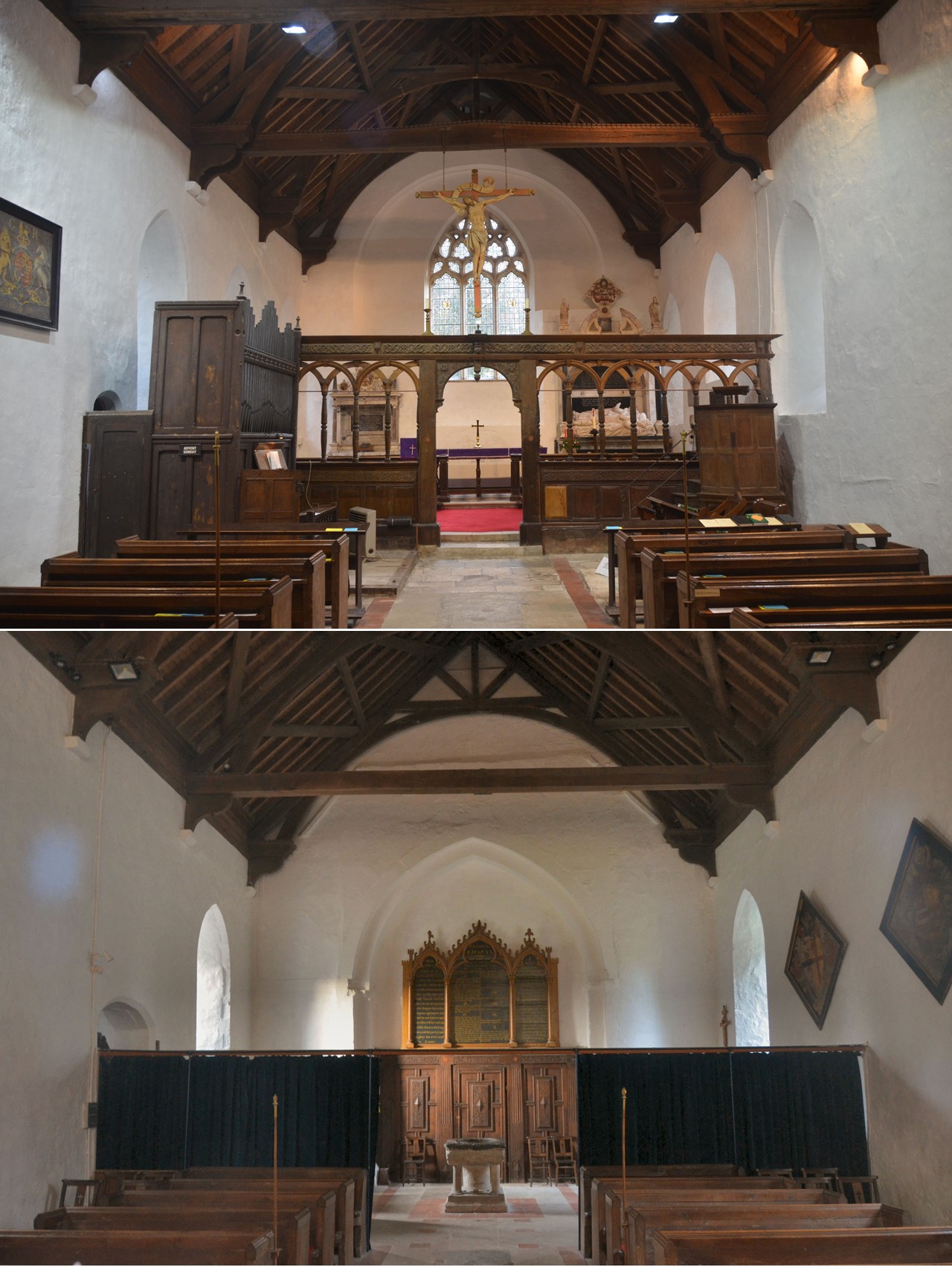 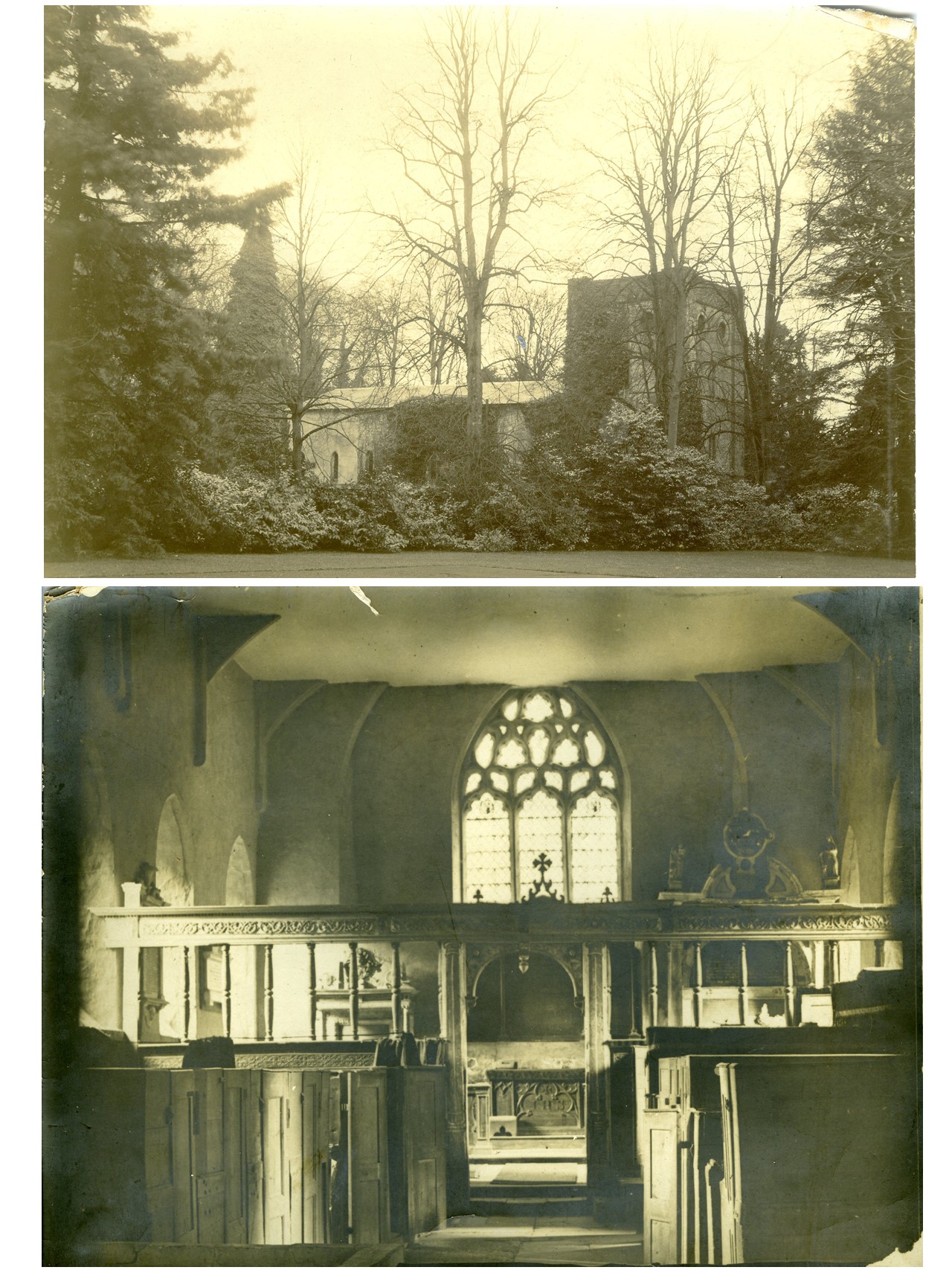 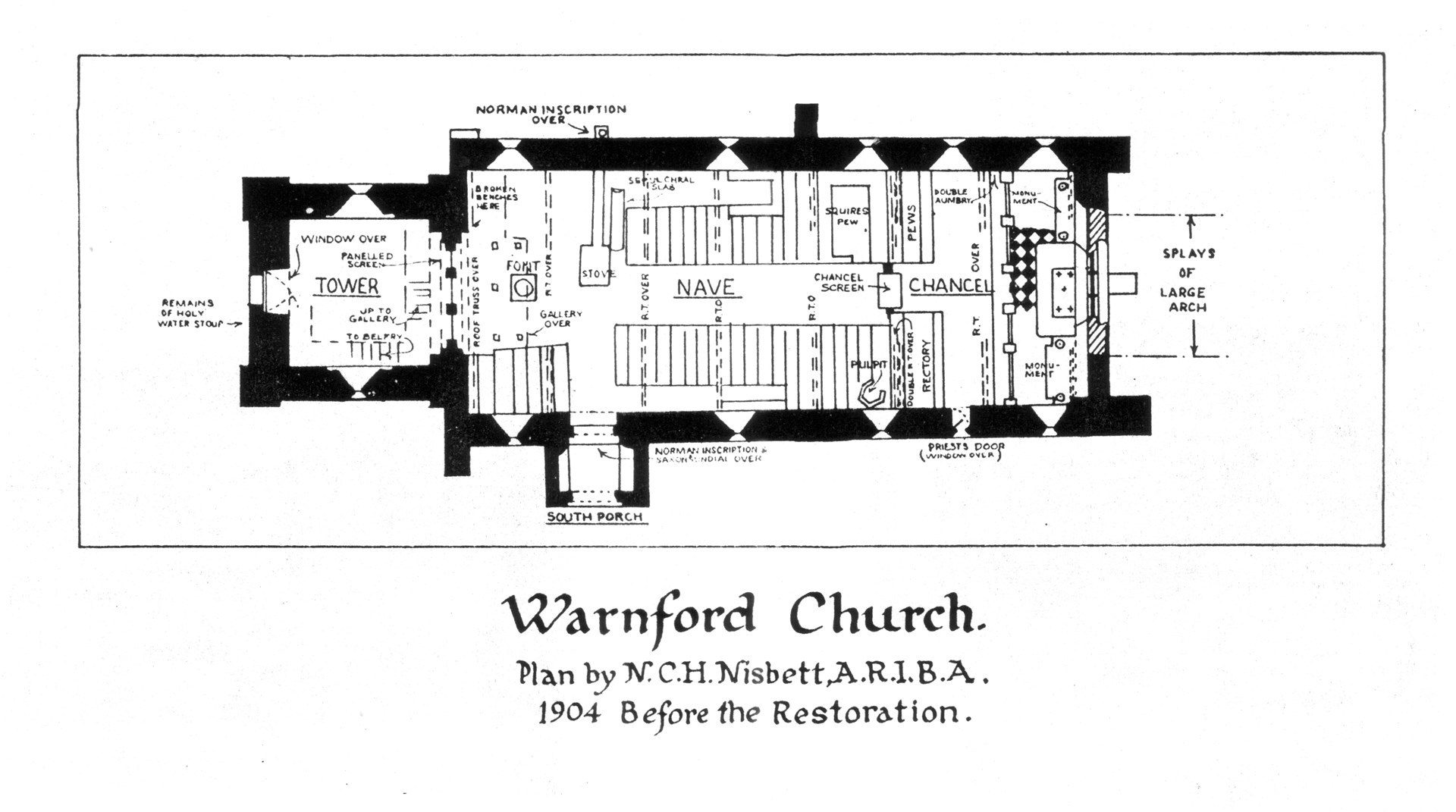 Warnford Church Plan by N.C.H. Nisbett 1904 Before the Restoration 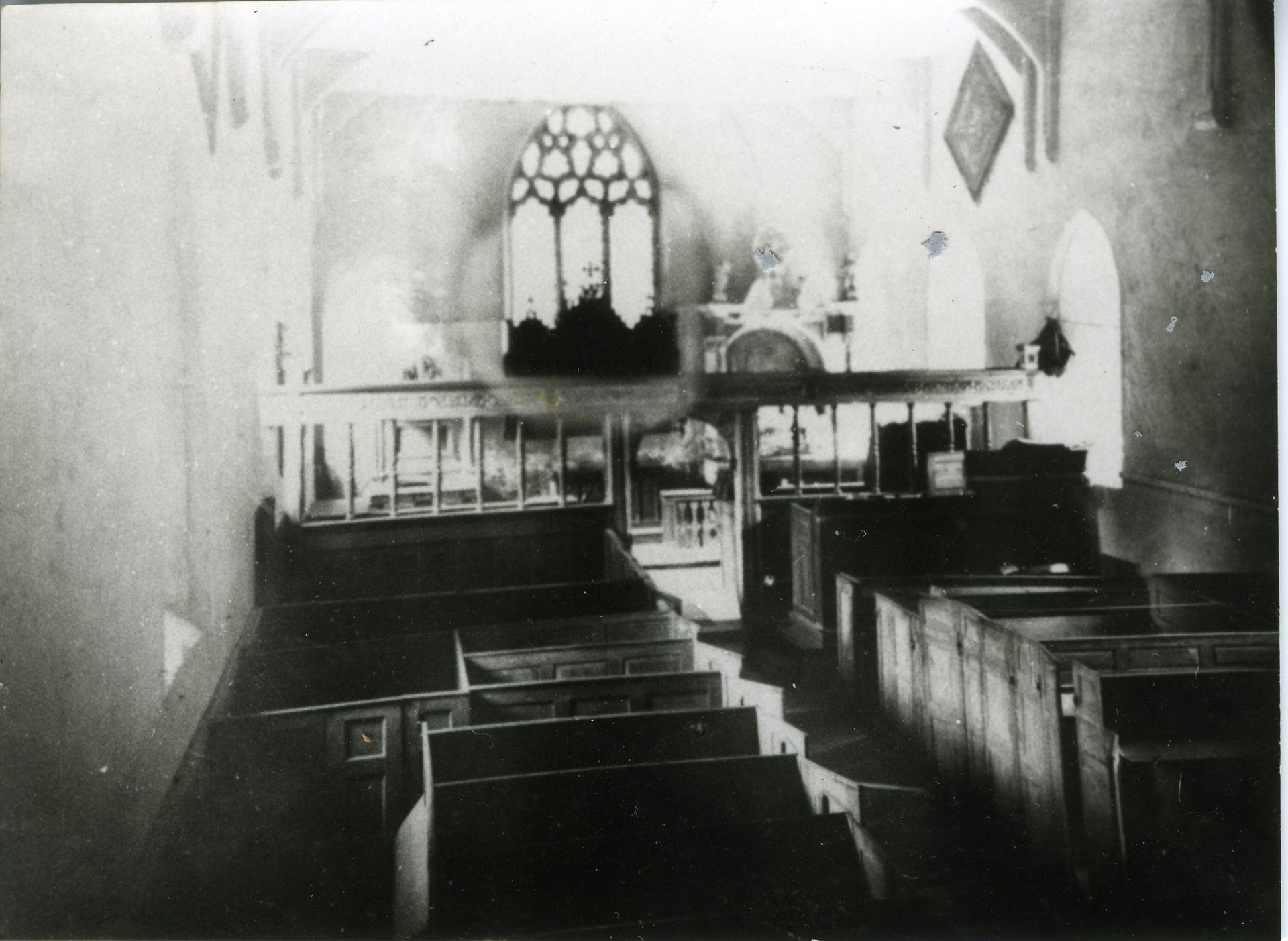 The Nave and Box Pew arrangement before 1905.

The interior walling is plastered and distempered over many layers of limewash. In medieval times, the church would have been decorated with wall paintings. Traces of these can still be seen in the church.

The tower arch stands between the (faintly visible) Saxon quoins, and is filled by a Jacobean screen with a central door and ornamental panels and pilasters below a roughly plastered partition which formerly gave access to a gallery, installed in the 1811 renovation. From 1811 until 1905 the gallery, supported by four iron pillars, extended across the full width of the nave, and the beam beneath it rested on the niches cut out of the arch. The gallery was used by the singers, accompanied by a barrel organ, which was sold (in 1906) for £6.

There are two 13th century sepulchral slabs of coffin-lid type: one a tombstone with a carved foliated cross which lies beside the chancel entrance - probably its original position; the other was moved from opposite the south door.

The north and south windows, five on each side, are 13th century lancets with freestone jambs and internal quoins. The lights are square-headed panes with clear glass and about half of them have iron vents.

Behind the organ is the rood stair door in the north wall. This rood stair door was discovered in the restoration of 1905, and has at its foot two steps which appear to lead upwards into the window.

Also on the north wall near the tower is an attractively carved War Memorial dating from 1974 commemorating John Labarie Tomkinson a wireless operator in a Wellington bomber shot down over Hamburg on 13 March 1941. Remarkably he is the only person from the village killed in the two World Wars. Few villages in the country have been so fortunate.

After being re-floored in the major1905 renovation, the seating in the nave was rearranged. The box pews were cleared away and the oak benches were preserved with alterations to provide wider and more comfortable seats. The two Rectory pews in the chancel were removed at this time but the squire’s pew survived until 1937 when it was replaced with the current Organ. It was a solid affair, which stood on the wooden platform where the organ now is, and it was screened from the gaze of the congregation and from draughts by curtains. The upholstery of the cushions was in blue and yellow - the squire’s racing colours.

The pulpit is good 18th century local work. It is polygonal, on turned legs with Jacobean-type panelling, and it seems to have been the upper part of a two-decker. The clerk’s desk has gone and at the foot of the pulpit is the priest’s reading desk.

The pre-Reformation screen, of stone or stone and wood, stood 5 to 7 feet west of the present screen. The absence of a chancel arch in this church indicates a simple pattern of screen, without Doom and canopy. It would have been used for the reading of the Gospel at Mass, or perhaps only for lights: and when at the Reformation, the Rood was destroyed. the Rood-screen often went too.

The Jacobean screen stands on the lowest step of the chancel and has its date – 1634 - on the upper rails. The solid portion is made up of old panelling and it was solid to an inconvenient height: 5ft. 7in. from the nave floor. In 1958 it was brought down to just over 4ft., which allows a better view of the altar. This work, and the carved sheaves of corn on alternate (and modern) balusters were dedicated in memory of a churchwarden: G. H. Cholmeley, of Riversdown. The hanging Rood is the work of Martin Travers in 1938.

The font stands at the west end of the nave. It is of Hampshire workmanship, not unlike that at Meonstoke and is made of Purbeck marble. It dates from about 1130, and comes from the older Saxon church. The bowl, lined with very ancient lead which overlaps the rim haphazardly, stands on a large central shaft, with smaller shafts at the four corners. On the east side there is thought to be an Agnus Dei between two beasts; on the north, three birds; on the south, two large beasts; on the west, two birds support some carving which cannot be identified. Until the 1906 restoration, the font had ironwork fastenings and a padlock to secure a heavy plain wooden lid. The modern font cover was made by Martin Travers, and the position of the font is much improved by the removal of the gallery at the west end.

The earliest church - of the 7th century - may well have had a roof thatched with river reeds. Then, in Norman times, a tall pointed roof, was likely covered with oak shingles. In 1580, this was removed; the walls of the nave were raised three feet, and a Tudor roof, with painted panels inside and a lead covering, was put up, with a much flatter pitch. In 1752 this was repaired in the renovations undertaken then. Further work had to be done in 1811 and the lead was replaced by slates. In addition a plaster ceiling was erected below the roof beams, at a level which cut two or three feet off the apex of the east window, spoiling the look of the decorated tracery and excluding a certain amount of light. The unfortunate effect of this can be seen in old 1900 photographs, which also show the Victorian triptych (now at the west end of the nave) blocking the lower part of the east window. With no clerestory and no artificial lighting, the church must have seemed very dark to the congregation in the box pews.

The recurring trouble in the roof was largely due to its low pitch which, intended to carry lead, was not sufficient to keep out water when slated. There was no boarding under the slating (counter to the original architects plans) and the battens on which the slates were laid, decayed; to the point that the whole structure was rotten and the vibration caused by singing was, by 1890, thought to be dangerous.

As part of the major 1905 restoration, work was put in hand to replace the roof. The existing slating and the battens of the roof were removed, together with the lath and plaster of the ceiling, and the walls were lowered to their original height: and the underside of the roof was arranged to form an open roof below new boarding and tiles.