This article was written by Peter Short, long time resident of the village and farm manager of the Warnford Estate.  He has kindly agreed to put his memories of living and working in Warnford in the second half of the 20th century down in print to be preserved for posterity.

This was written during the Covid19 "lockdown" of 2020 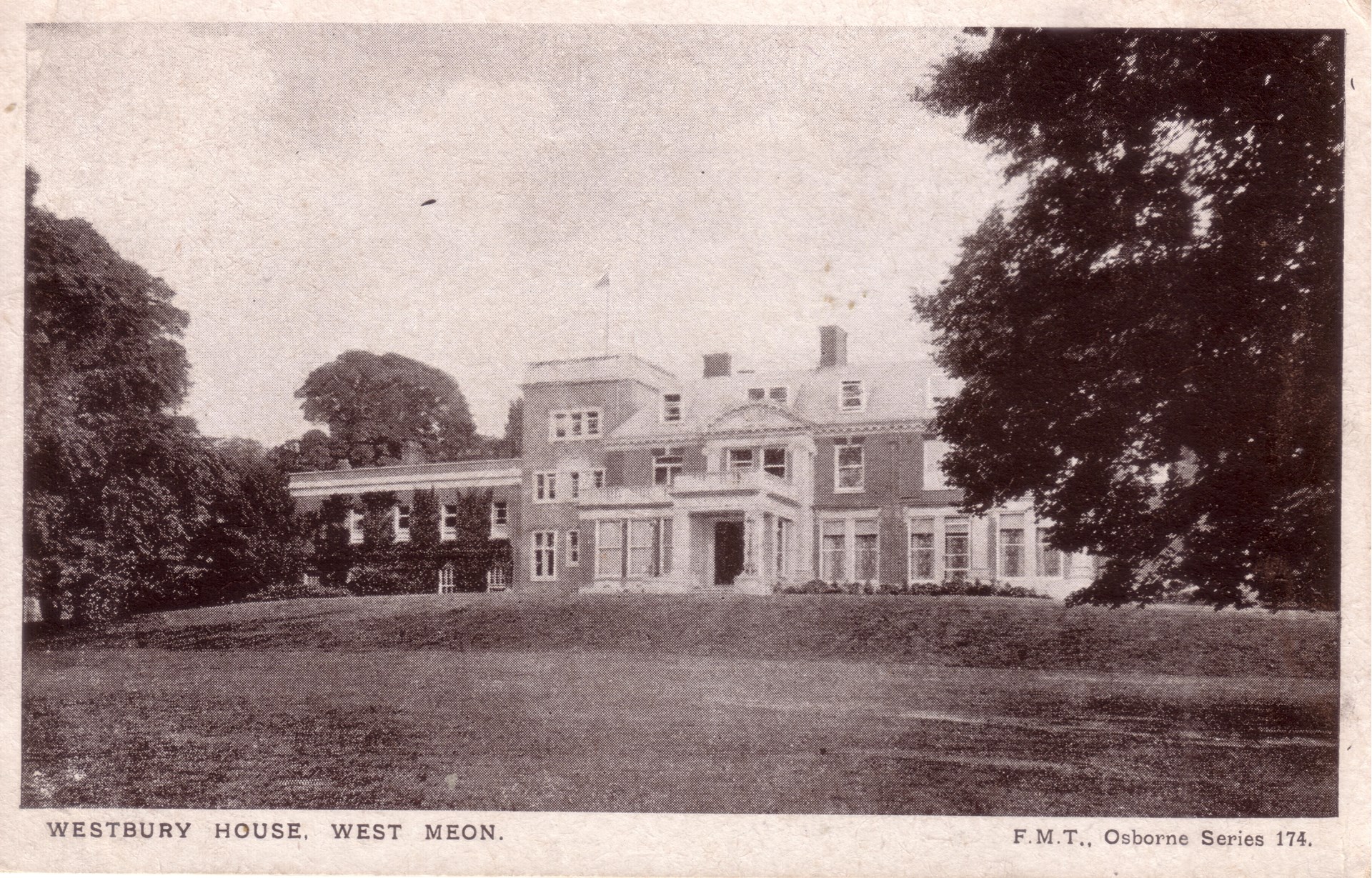 My Father and Mother delivered me to Westbury House School, as a border, in September 1942. I was nine years old and one of the few that turned up in a car, as petrol rationing was in full swing but fortunately for me my father was in the motor business and so we did have some petrol. Most of the boys arrived by Banham taxi from West Meon station.

Standing forlornly inside the front door by that wonderful staircase awaiting my destiny, a boy walked by and deposited a sweet in my cap. I remember that kindness to this day as, don’t forget, sweets were strictly rationed then. That boys name was Bill Couldery, bless him.

The school, at that time, had about 42 borders and one day boy and was very efficiently run by the headmaster, Thomas Christopher Whitehead ex Wykehamist and austere bachelor and country gentleman. He was ably assisted by his sister Edith Whitehead who dealt with the domestic side overseeing the cooking and general welfare of the children. In turn she was helped by the matron Miss Semple who looked after our health and general wellbeing.

The masters consisted of Vincent Godefroy, who taught English and his wife who taught art, Pat Walker who taught general science, who was later joined by his brother George, when he was demobbed, and who many of you will remember as living in the cottage adjacent to the cricket pitch. French was taught by Monsieur Cordell, a genuine Frenchman, who travelled up by bus from Fareham each day and was of a portly nature, much to our amusement, however he was not to be trifled with and could deliver a very sharp tap to the head which became known as the ‘Cordellian tap’ when one misbehaved and it really hurt. Mathematics was the realm of Mr Yates known as ‘Daddy’ Yates and whose stock phrase when a request for ‘May I be excused Sir’ was  ‘Yes, make haste back’

Food was severely rationed and so we didn’t have ‘cordon bleu’ style meals but they were adequate for hungry young boys. The breakfast porridge was just awful and full of lumps and was not unknown to end up in a handkerchief to be deposited in the ‘Loo’ when the occasion arose. Miss Whitehead inspected each plate as it was returned to be deposited on the pile and if anything was left there was a strict inquiry as to why. Nettles proved to be an interesting vegetable and if picked young are edible and as most green vegetables were not top priority for young boys, were eaten, if not enjoyed.

Miss whitehead kept some hens and the treat of the year was a boiled egg in the week before the end of the Easter term, whether she had stored them up for the whole term we neither knew nor cared.

There were three classrooms in the big hall at Westbury, Top, middle and junior so that paying attention to your particular lesson was not always easy.

There was a gymnasium for use on wet days or in the depth of Winter. Amazingly there was also a small squash court in the roof and was used on occasion to administer 6 of the best if a serious misdemeanour had been committed. It was a bonus scoring piece of fun to see who registered the most number of strokes during their lifetime at Westbury. I only made it to 9 and was not even in the running!

On Saturday evenings we had reading, the senior boys were privileged to be read to by Mr Whitehead in his study by a roaring peat fuelled fire while the juniors were entertained in Miss Whiteheads study in an adjacent room.

Sunday morning we walked in crocodile fashion to West Meon Church to be bored to death by a 20 minute sermon delivered by Parson Castle, as we boys knew him. We were often jeered on the way by the local youth among whom were Don Tutt, ‘Muddy’ Mudkins, possibly Ron Stone, to name but a few.

Thomas Whitehead generally read the first lesson and the second was read by a churchwarden or a village worthy.

As boys, we sat in the pews on the far left hand side of the church facing towards the Altar with Mr Whitehead sitting in the next pews over where he could keep an eagle eye on our behaviour. Edith Whitehead played the organ.   When attending services at West Meon now I quite enjoy sitting in the pew that I sat in some 75 years previously.

We played cricket in the summer term and had both home and away fixtures against The Pilgrims school in Winchester and Ferndown and Twyford schools. In my first year we were transported by Mr Banham’s taxi but later when Rex Chester became a pupil we were driven to away matches in his father’s large Buick and on rare and special occasions in the Rolls Royce. Can you imagine the pleasure that gave to us children, in war ravaged Briton, to arrive at an away fixture in a chauffeur driven Rolls Royce. We had virtually won before the game started.

Winter term was soccer, again with the same opponents ( Ferndown were always too good for us being a much bigger school) but we held our own with the other two. The Easter term was Rugger which being of rather small stature I didn’t really enjoy so much and on one memorable occasion when I actually had the ball I was gathered up by one Tim Shepherd, who was exceptionally tall for his age and carried over the touch line and ceremoniously dumped.

We had a sports day on the cricket field ably run by the Walker brothers with all the usual field events and throwing the cricket ball etc,.

I remember on  one occasion when we were playing cricket a plane swooped very low over the field. We had been taught to throw ourselves on the ground making sure that we raised our stomachs to avoid shock. A piece of paper wrapped around a stone crashed down and when opened turned out to be a message from a former pupil (Kim Haylock) who was by then in the RAF and flying ‘Spitfires’.

The school religiously attended the West Meon Village Fete which was held, as now, in the grounds of West Meon House, then owned by Major Waudby and was a good day out for us and much enjoyed. The Hon. Mrs Cubitt lived in Hall Place and was  highly respected by the village and by us boys who were taught not just to raise our caps to a lady but doff them completely until said lady had passed.

Notable students at Westbury during my time were Harold Walker son of Admiral Sir ‘Hookie Walker’(hookie because he had lost an arm in the first world war) which was replaced by a brass hook. Harold, who was also known as ‘Hookie’ later became the Ambassador in Iran and was there when the  Shah of Persia was deposed. The Moberley brothers, one of whom became an M.P I believe. Robin Lush and brother Warren with Robin becoming  an eminent doctor at Rogate near Petersfield.

Eddie Troubridge whose father was Admiral Troubridge and was also Knighted. The 3 Ryder brothers, the youngest of the three being Denys who many of you will remember as a prominent chicken farmer ( Ryder Humphreys) and who lived in East Meon for many years and sadly died recently. Bill Howard whose father was a very large timber merchant with premises on Southampton water.

Westbury boys went on to all the prominent Public schools and excelled in many sports and academia and it was a sad day when it finally closed down. Many old boys were reunited when Denys Ryder gathered an impressive number to a reunion lunch in a marquee opposite the main door of the school. Sadly as it had become a nursing home we were not allowed in other than a peep round the front door.

I am deeply saddened to see the state of the house and grounds now in total disrepair and dilapidation when it could be put to such good use in the local community.