The parish of Warnford, covering about 3,178 acres, lies south of Kilmeston and Hinton Ampner, north-east of Exton, and west of West Meon, and falls naturally into two parts: the comparatively low-lying land bordering the River Meon on the south and east through which runs the main road from West Meon to Droxford, and the downs on either side, Wheely Down and Beacon Hill reaching the heights of 500 ft. and 659 ft. respectively. A road to Winchester branches off from the main road at the south end of the village, climbing up from about 250 ft. above the sea-level to about 550 ft. by Wind Farm in the extreme western angle of the parish. From here a fine view opens out to the low-lying parishes to the north - Beauworth, Kilmeston, Hinton Ampner, and Cheriton.

In the Bronze Age people built burial chambers called barrows at Beacon Hill and Old Winchester Hill, both near Warnford and there are extensive celtic field systems nearby. Human beings have lived and farmed in the area for thousands of years.

In the 6th century AD a people called the Jutes from Denmark settled in central Hampshire. A tribe called the Meon gave their name to the River Meon. Warnford was, obviously, the site of a ford over the river but we do not know for certain what the 'Warn' meant. It is either a corruption of a man's name like Warna, who may have owned the ford or more likely, ‘wer’ making it the ‘ford at the weir (on the Meon)’.

Historically, there are some old references to the Meon Valley, for example, in the Anglo-Saxon Chronicle which states that in 932 King Athelstan granted the land at Meon to thane Aethelgeard and that in 940 King Edmund granted land at Exton on the river Meon to thane Aethelgeard with later additions by King Edgar. Thus, the first recorded owner of the land may have been the thane Aethelgeard. The Crown held land in this part of England from very early times, it remained in royal hands for some years.

For Warnford specifically, before the Norman Conquest there seem to have been two manors one held by King Edward and the other by Hyde Abbey, Winchester.

From the available evidence, the manor held by King Edward was present day Warnford, and the other manor was Upwarnford – likely consisting of Bere, Wheely, Riversdown and Lower Turville.

It is in this era that Warnford Village was born. In the Later Saxon period farms began joining together to form larger clusters. This meant more opportunities for collaboration and protection.

Here, the first documentary evidence can be found of the village of Warnford, in the Domesday Book.

The Domesday Book has two entries for Warnford, representing Upwarnford [1] and Warnford itself. At the time of the Domesday Survey Hugh de Port held them both and they remained separate jurisdictions until the end of the middle ages.

1.         Hugh de Port holds Warnford of the Hyde Abbey, and Alfward and Ketel held it of the abbot, and could not remove. It was then as now assessed at 8 hides. Here are 6 ploughlands, 3 in demesne; and 8 villeins and 6 borderers with 3 ploughlands; also 6 slaves, a mill which pays 10s., and 8 acres of meadow. In the time of  King Edward its value was and is £8, and when it came into possession £6.

2.         Hugh de Port holds Warnford, and Wulfric and Wulfward held it in parcenary of King Edward, and had 2 halls. It was then assessed at 4 hides, and now at 2 hides wanting a yardland. There are 3 hides and 4 acres of land in Hound, which belonged to Warnford, and were assessed in Mansbridge hundred. Within the whole are 7 hides. Here are 9 ploughlands, 3 in demesne; and 31 villeins and 9 borderers with 6 ploughlands; also a church, 6 servants, 2 mills which pay 20s., and 20 acres of meadow. Its value in the time of King Edward was and is £14, and when it came into possession £8.

To put this record in perspective, this was in the largest 20% of settlements recorded in Domesday and makes it bigger in the 11th century in terms of its population than any other Meon Valley village except East Meon, in contrast to the present day, when it is one of the smallest.

By the 12th Century, part of the manor had been granted to the Knights Templar, first Warnford Mill by John de Port and a second gift in 1177 of ~30 acres by his son Adam de Port.

Up to this period, the vernacular settlement stood close to the church and manor on the old Meon Valley road until it was moved after the construction of the turnpike road. The local story attributes this move to the lady of the manor wanting more privacy. Though unverified, there is an element of truth in this version of events. The course of the new road swept to the west around Warnford Park, isolating it from passing gaze. In order to take full advantage of this opportunity for privacy, any peasant homes within the park would need to go. This can be seen below, comparing Isaac Taylor's one inch map of Hampshire, 1759 with that from after the turnpike, Thomas Milne's one inch map of Hampshire, 1791. 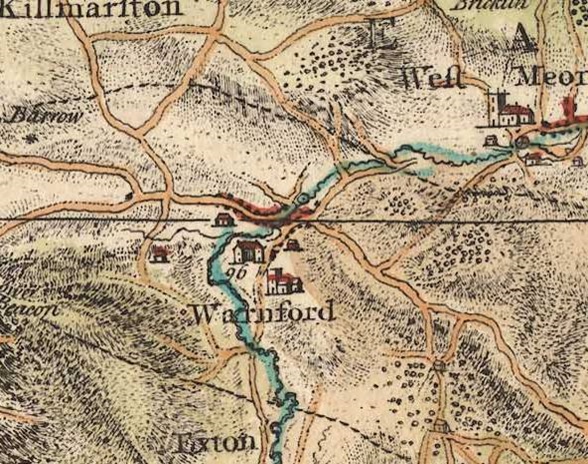 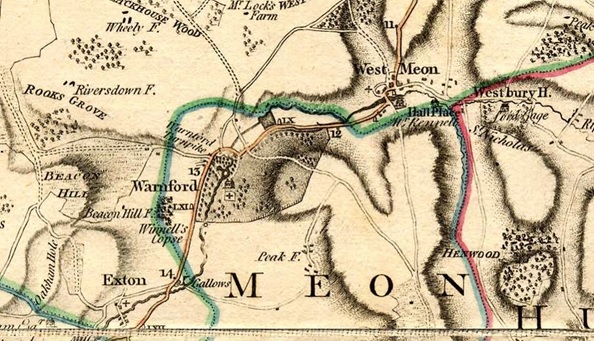 Interestingly, we have just one description of a village house, the old pre-1810 Rectory, situated ~150m south on the old road from Manor Farm to Warnford Park House;

“The house is situated in a low, wet, unhealthy spot near to a standing water. It occupies a space of 2575 square feet. There is a storey below the ground that has been known to be four feet deep in water. On the ground floor are two parlours and offices. Above are bedrooms and there are garretts in the roof. The building is very ancient and has given way in several places and is shored up to prevent its falling and it is necessary it is taken down”,

This was in 1802, just before it was demolished and the 1810 rectory built on a new site (now Abbey House).

The present settlement of Warnford is on the northern fringe of the Park where the A32 loops eastwards then north-east towards West Meon. The village of Warnford can be seen below from the 1839 tithe map. 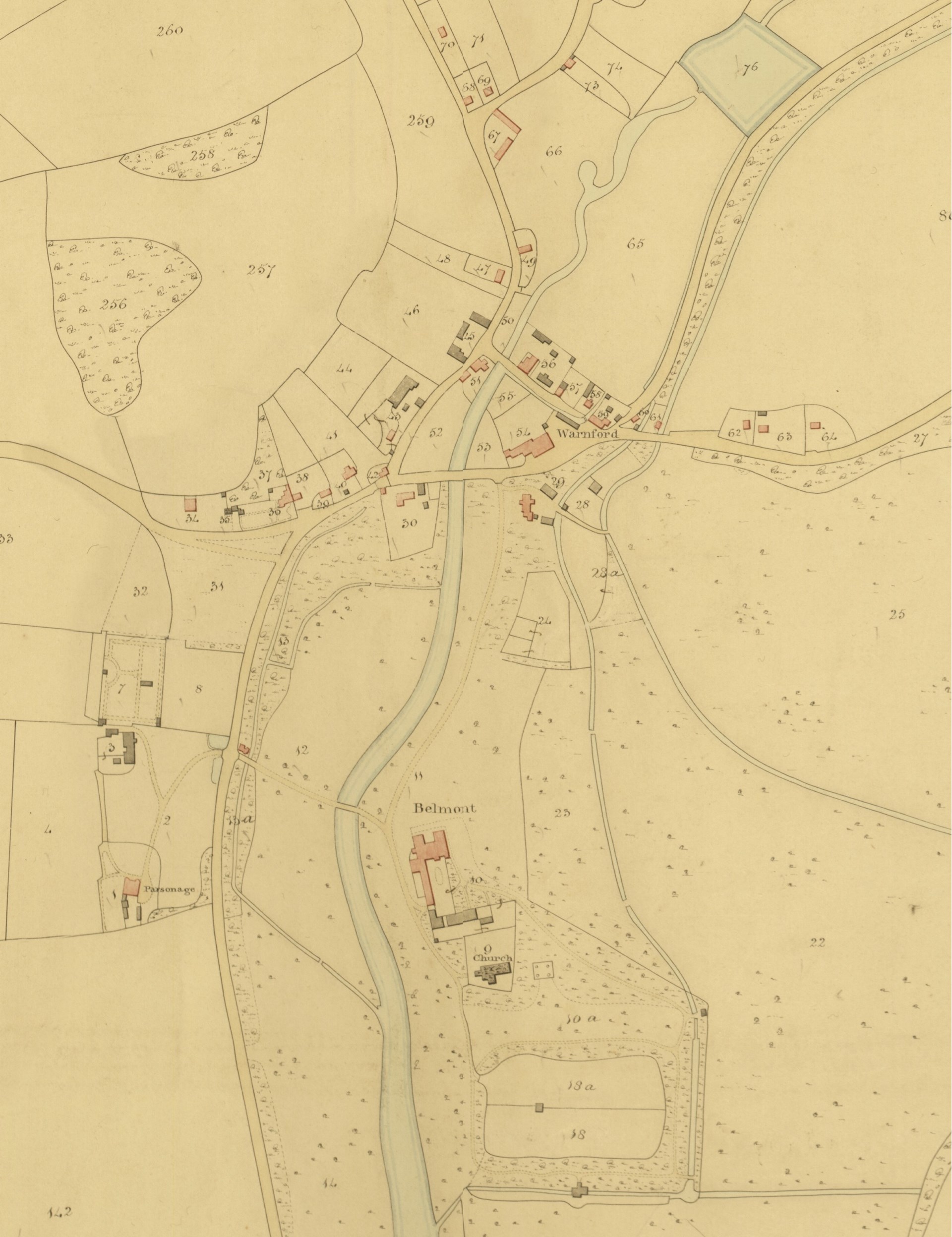