The mists start to clear in Warnford in very late Saxon times of the people who lived there, with;

The surrounding farms/settlements also date from documentary evidence to at least; Bere Farm to 1200,  Peake Farm  to 1311 Riversdown  to 961, and Wheely Farm to 1045.

Interestingly, Wheely translates in Old English to wēoh ‘an idol, a shrine’ and lēah ‘clearing, clearing in a wood’, denoting a clearing or grove with a pre-Christian shrine or temple. The place-name Wheely Farm is thus testament to a pre-Christian site of worship in the Meon Valley, and therefore must have originated before the Christian conversion of this region (i.e. before 680). This place-name also provides further evidence that the Germanic settlement of the region had early origins.

The next time Warnford appears in the history books is the Domesday Book. It has two entries for Warnford; Upwarnford and Warnford. Upwarnford consisted of Bere, Wheely, Riversdown and Lower Turville – the whole of the upland area apart from Beacon Hill which would have been required for grazing for the manor below. Warnford consisted of the estate that has since become Warnford Park and village.

In Warnford the Domesday Book listed in total the following number of households,

Borderers were a person ranking below villeins and above serfs/slaves in the social hierarchy of a manor, holding just enough land to feed a family (about five acres) and required to provide labour on the demense on specified days of the week.

Villeins (ranking higher than borderers) generally rented small homes, with or without land. As part of the contract with their landlord, they were expected to use some of their time to farm the lord's demense or provide other services, possibly in addition to a rent of money or goods. These services could be very onerous.

To put this record in perspective, this was in the largest 20% of settlements recorded in Domesday and makes it bigger in the 11th century in terms of its population than any other Meon Valley village except East Meon, in contrast to the present day, when it is one of the smallest.

This can be estimated as a population of Warnford Parish of about 250.

The next time Warnford appears in the record book is in the poll tax records of 1379.

This records the heads of 75 households in the parish, with 48 liable for tax. These include;

All the rest are listed as farmers. This is not necessarily accurate as there was considerable poll tax dodging. Owning up to a profession meant a larger tax demand! Indeed, the Peasants' Revolt started in Essex on 30 May 1381, when a tax collector tried, for the third time in four years, to levy the poll tax. Richard II's war against France was going badly, the government's reputation was damaged, and the tax was 'the last straw'.

The Lay Subsidy was a grant to the Crown (in 1585 it was Elizabeth I), authorised by an Act of Parliament of a tax to support the expenditure of the Crown. This included the payment of the Armed Forces and the building of naval ships. The clergy  and peers were subject to separate arrangements. The form of tax from the 14th to the 17th century was a fifteenth and tenth, which was based on a valuation of a persons “moveable” goods. This included crops, these were levied at a fifteenth in rural areas and a tenth in the cities and boroughs.

The tax was levied on individuals with moveable goods worth £3 or more and the threshold of liability for income from land was 20s. Rising rates of taxation led to widespread under-assessment and evasion, and by the reign of Elizabeth I, the lay subsidy had ceased to be an accurate gauge of the wealth of the kingdom. It does, though, open a window onto the higher levels of society in Warnford. The list below of George Kelseye of £3 / 3s means the goods were valued at £3, and he paid a levy of 3s.

The next time Warnford emerges into view, was the in The Hearth Tax records of 1665. It was one of the taxes introduced in the reign of Charles II to cope with the debts inherited from the period of the Commonwealth.

Warnford lists 25 households liable for this tax and 8 not, noting paupers were excluded from these numbers;

It is believed that 6 or more hearths indicates gentry and large farmers,  3-5 indicates yeomen (a smaller landowner, a farmer of the middle classes) or wealthy tradesmen and 1-2 indicates labourers or servants.

This can be estimated as a population of about 150 and as you can see, it has become more prosperous over the years.

At the time of the first census in 1801 Warnford was still a small village with a population of only 272. 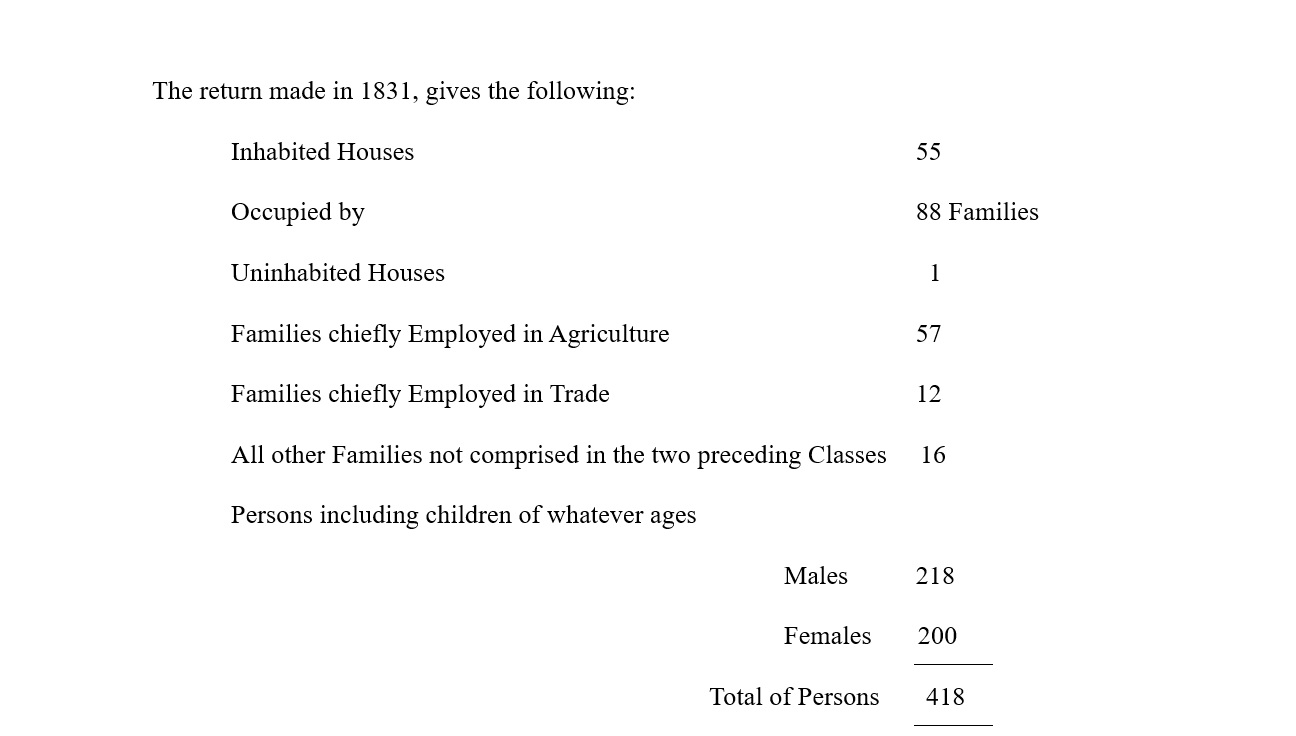 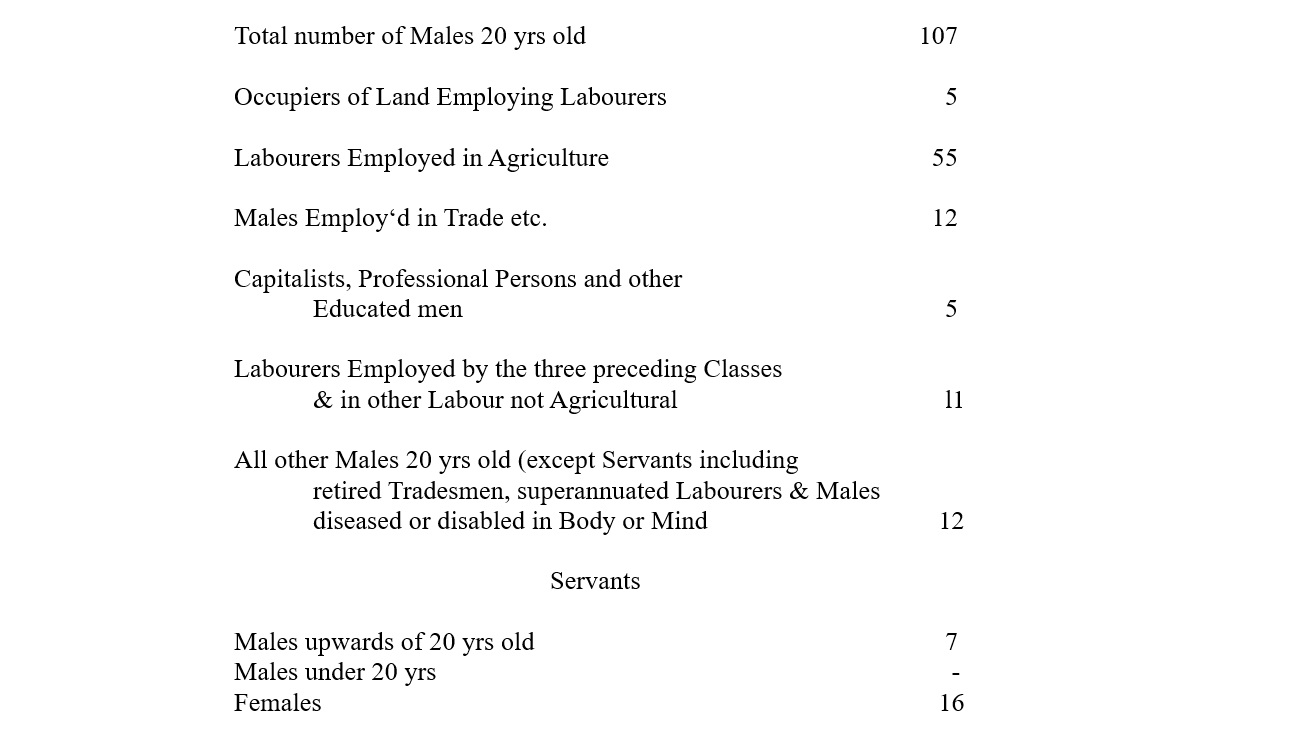 To expand on this census, the Baptismal Register from 1813 to 1872 is full of interest. Warnford Park or Belmont kept a large staff: there was a bailiff, two coachmen, a groom, footmen and gardeners among the fathers enumerated in the Register. The village was also much more self-sufficing than it is in this century: a shoemaker, a tailor, a painter and glazier, a carpenter and a blacksmith were the chief tradesmen. Only the richer folk - if they did not keep their own carriages - could afford to hire one of the two postchaises (driven by George Voller or Thomas Pink) to visit one of the towns and toll would have to be paid to the Keeper of the Turnpike Gate who lived in the cottage, now gone.

Warnford reached a peak of 460 in 1861 but afterwards it declined to only 277 by 1901. Today Warnford is a picturesque little village with a population of about 220.