The Tower and Bells

The massive Norman tower, 50ft. high, with two string courses and piers of Quarr stone, was built in approx. 1130, attached to the west end of the old Saxon nave and chancel. It was built by Henry de Port, grandfather of Adam de Port who would later complete the church in its current form, building the nave. It now has three interior stages. The lowest, used as a vestry, is lit by three deep-set round headed windows. The window in the west wall is the most elaborate and has two orders of colonettes with foliated capitals. The upper stages are reached by a modern wooden stair, and the top floor is lit by four pairs of round windows or oculi, two in each wall filled with grilles. This is the bell-chamber in which currently hang seven bells. 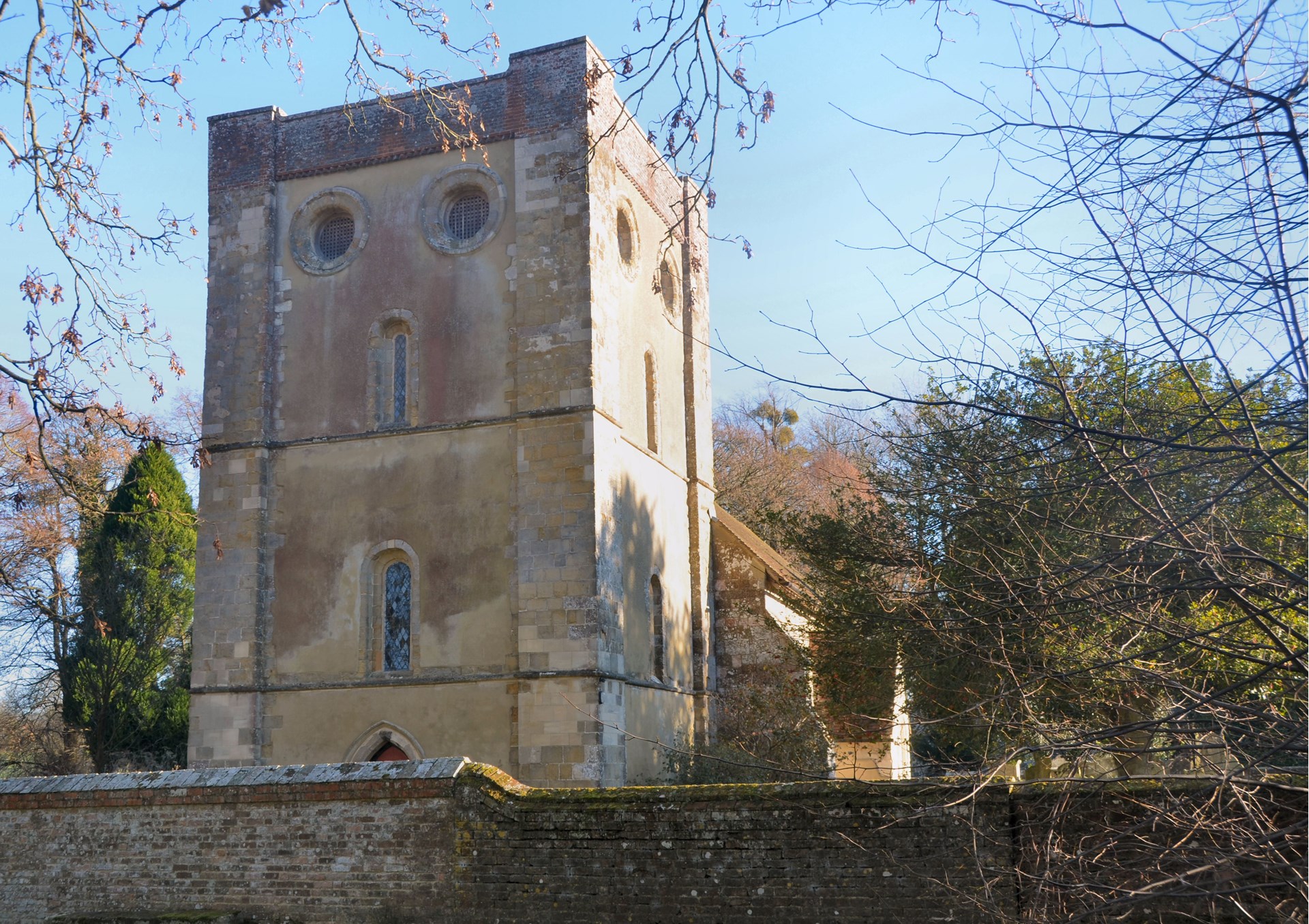 Bells were a part of the medieval English churches and as you think about that time in England’s past, you can imagine them ringing at regular hours, calling the faithful to services or prayer, or sounding the death knell of one who passed. And there was also the “curfew bell”, rung at eight or nine in the evening, to tell everyone it was time to cover their fires and go to bed.

Warnford almost certainly would have had bells in its tower in medieval times. The first record of this is in 1553, when Edward VI ordered all church goods to be documented. This record details Warnford as having 3 bells. From the 17th century there were six bells, cast by John Wallis, of Salisbury, and his successor, John Danton. The legends, dates and weights were:

In, addition, the Treble bore the arms of the Neale family.

At this time, bells would be hung in locally made, wooden frames, sometimes with poorly made joints, that would creak and groan under the strain of the moving bells. The way bells are mounted in a church tower is that the bell is attached to a headstock, historically made of wood. This has to withstand the dynamic force of the bell as it swings, up to three times its static weight. At each end of the headstock are trunnions or bearing pins which are located in bearings in the gudgeons attached to the frame. The frame is rigidly attached to the fabric of the tower. The gudgeons would be sunk into holes, scooped into the frame, possibly lined with copper, and requiring constant greasing. Wooden frames would contract in the warm weather, loosening the joints, and, together with the lack of lubrication, made the bellringer need the constitution of an ox as he heaved, with sweat pouring from every joint. The remains of one of the original wooden headstocks can be seen below. 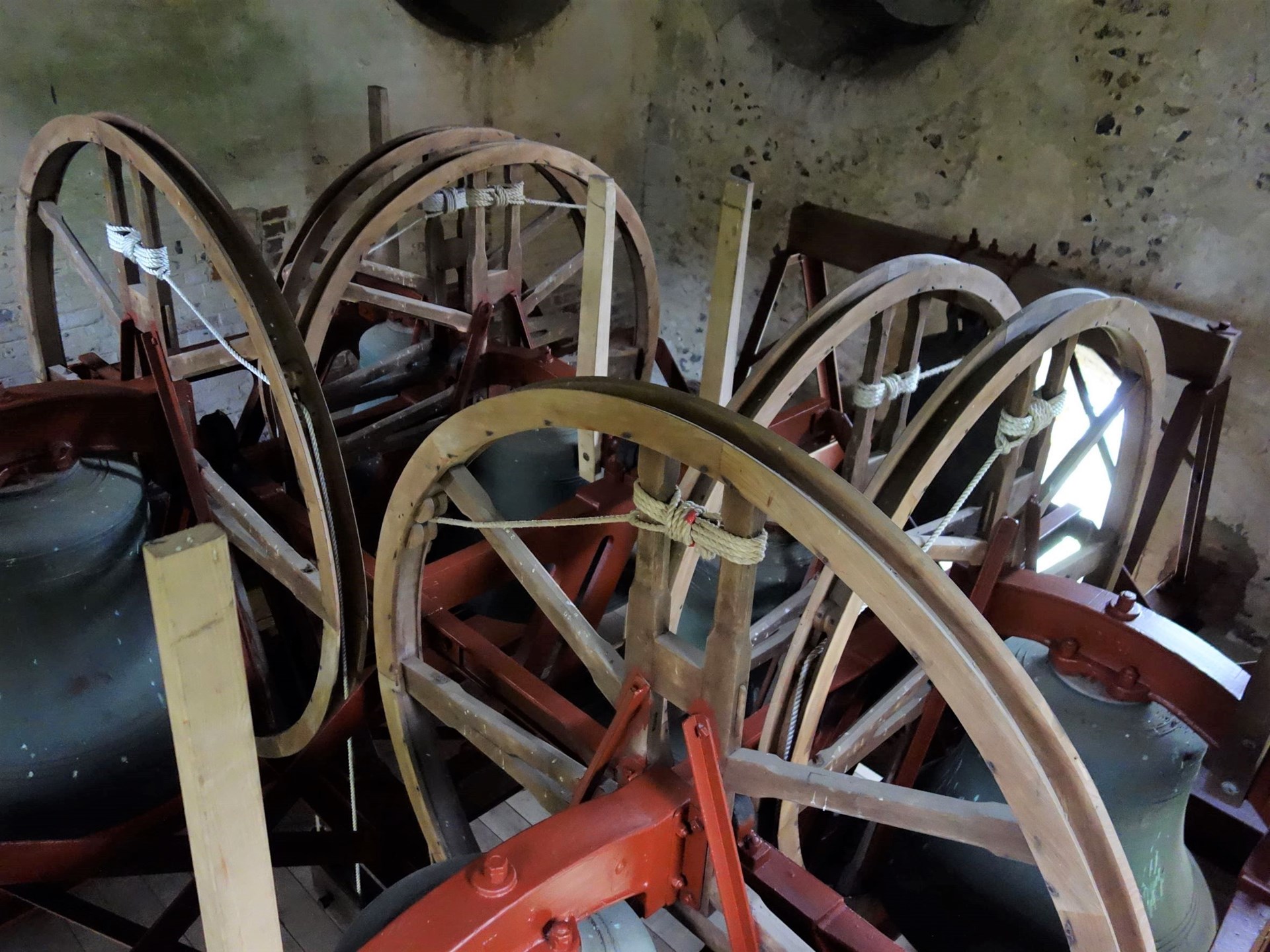 By 1950, the whole tower was in a dangerous condition and the bells had not been rung for 65 years. They were removed and laid on the floor of the church while the restoration was put in hand. Behind the 1752 brick parapet, with its stone slab coping, the top was strengthened and locked together by steel and concrete reinforcement upon which was rested a new oak roof covered with the old lead. recast. Another girdle of reinforcement was made half way down, and massive new floor timbers locked into it.

When the ruinous belfry was cleared away, the original beams of two earlier belfries were disclosed, and as they were in good condition, they were treated against infestation by beetle and allowed to stay in position. The new bell-frame is sited just above them. and the steel joists on which it was to rest were designed as part of the scheme to brace and strengthen the tower. At the same time the interior masonry was thoroughly repaired.

In 1958, the bells were recast at the foundry of Messrs. Mears and Stainbank, at Whitechapel. The old 5th was the only bell in a fit condition to be kept and was hung as the Service or Sanctus bell. It was a great achievement to carry out such a restoration in a parish of 250 people. The cost of the work on the bells was £1,760, of which the Chester family gave £1,200.

The dates and weights of the bells in Warnford church today can be seen below. 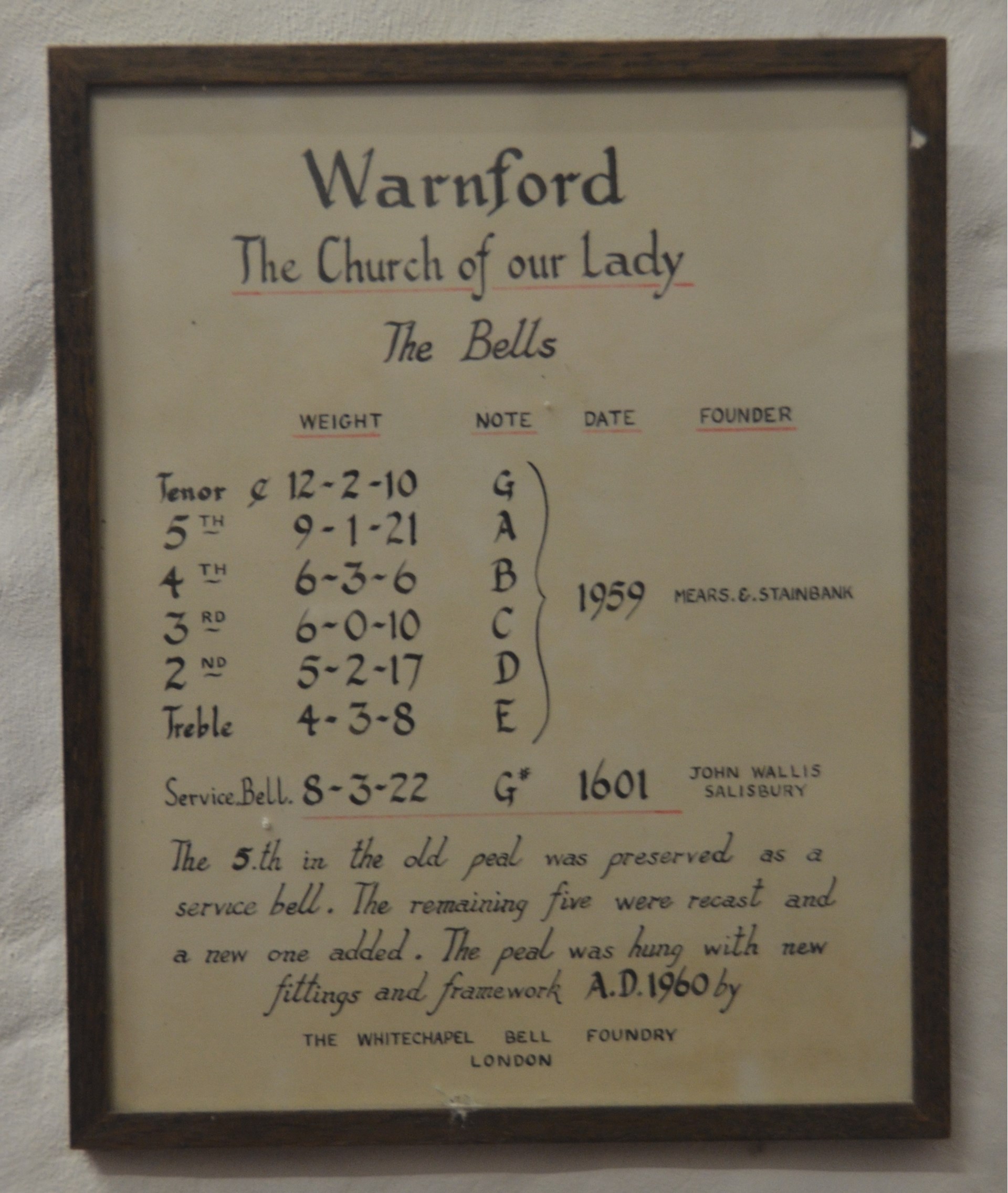 There is a 14th century door in the west wall of the tower, and on its south side, a holy-water stoup, of the same date as the door but not contemporary with the fabric of the tower. Its presence at the west end of the church, rather than in the south porch, shows that this door was at some time the main entrance. Originally the tower would have had no external door.

A door in the east wall of the tower leads into the nave; its enlargement in the 13th century weakened the wall so that two strong ashlar-faced buttresses were built at the exterior junction of the tower and the nave, to take the thrust. A window above the arch was cut at the same time and is now filled with cleft slats. which can be seen from the vestry. From the nave, the filling is largely concealed by the Victorian Triptych; which displays the Lord’s Prayer, the Commandments and the Creed. Until the 1905 alterations, this stood above the altar and blocked the lower part of the east window. From 1811 until 1905 a gallery, supported by four iron pillars, extended across the full width of the nave, and the beam beneath it rested on the niches cut out of the arch. The gallery was used by the singers, accompanied by a barrel organ.