The Palaeolithic period was the earliest and longest phase of human history. The South Downs, although heavily wooded, were an attractive area for exploitation, with the southern combes affording good access to the freshwater and marine resources of the coastal plain, while the northern escarpment provided an ideal vantage point for monitoring animal herds.

The Mesolithic saw the return of human communities to the South Downs in response to improving post-glacial climatic conditions. The warming climate led to the spread of a succession of woodland types, culminating in a mixed broad-leaved forest dominated by oak but including elm, ash, alder, lime and hazel. Human communities exploited this woodland and the rich resources of the river valleys. Settlements comprised semi-permanent base camps occupied during the winter months and a series of seasonal hunting camps.

In the Meon Valley, Palaeolithic and Mesolithic flints testify to activity during early prehistory, especially relevant is the spread of Palaeolithic finds from East Meon. Also, the South Downs Way was probably used from the Mesolithic and passed Old Winchester Hill, before crossing the Meon at Warnford.

The Neolithic saw the development of agriculture and the first evidence for largescale communal activity. Environmental evidence indicates a major phase of woodland clearance taking place at this time, as land was opened up to provide fields and sacred spaces.

The most striking evidence for the period exists in the form of ceremonial monuments. The earliest examples comprise earthen long barrows, which are found scattered across the downland, but with concentrations in Hampshire east of Winchester. These were both communal burial places and foci for social and ritual gatherings, serving to anchor the community in the landscape.

The Neolithic is represented in the Meon by flint material, but also by the presence of earthworks, such as the long barrows on Salt Hill (East Meon) and Long Barrow House (Droxford).

The Bronze Age is characterized by the introduction of metals, firstly gold and copper and later bronze. The earliest metals are generally associated with a new type of pottery, Beaker Ware, as well as the construction of a new type of ceremonial site, the round barrow. These monuments heralded a new way of thinking about society as they represented the burial of individuals rather than the communal burials of the preceding period.

The Middle Bronze Age (from c.1500BC) saw a dramatic change in emphasis away from the ceremonial and monumental landscape. Large-scale evidence for farming appeared with the creation of field systems defined by earthwork banks and ditches (and probably hedges). Small enclosed settlements of round houses representing farmsteads set within groups of paddocks are found across the chalk downs.

The Late Bronze Age (from c.1000BC) saw further changes with the disappearance of the round barrow burial tradition, the development of a settlement pattern characterised by unenclosed settlements, the creation of major linear earthworks carving the landscape into territories and the appearance of large defended enclosures (hillforts). Environmental evidence shows that woodland clearance had reduced tree cover on the eastern Downs to a level very similar to that of the present day, replacing it with an intensive mixed agricultural system in which sheep were becoming increasingly important. This regime saw the development of large areas of regular planned field systems, often surviving as lynchetted field systems (traditionally known as ‘Celtic fields’). The tree cover remained more extensive in the west due to the prevalence of poorer clay soils capping the chalk.

Fine examples of Bronze age settlement in the area can be seen in the barrows of Beacon Hill, Old Winchester Hill (below), the recent excavation of a barrow at Storeys Meadow (West Meon), the boundary and barrow at Sheepbridge and the Middle Bronze Age settlement at Westbury. 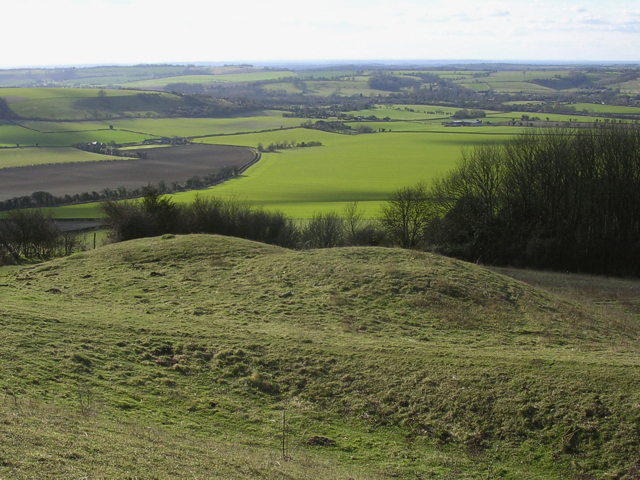 Double round barrow on Old Winchester Hill, looking down into the Meon Valley

This file is licensed under the Creative Commons Attribution-Share Alike 2.0 Generic license.

The Early and Middle Iron Age (up to c.100BC) saw a continuation of trends developed in the Late Bronze Age, with increasing numbers of open settlements and defended enclosures evident. Hillforts developed during the period, becoming larger and more strongly defended, with concentric rings of ditches and ramparts.

Increasing numbers of settlements are known from this period, including increasingly complex ditched enclosures and the distinctive ‘banjo enclosures’, many of which survive as cropmarks on aerial photographs. Increasing levels of trade with the Continent, both with native communities and with the expanding Roman Empire, brought a range of fine imports into the area.

Here, Old Winchester Hill is a fine example of an Iron Age Hillfort.

In addition, the slopes of the Meon Valley bear numerous traces of Celtic fields and track ways. Locally these can be seen extensively in the area, through Wheely either side of the Old Winchester Road, on Beacon Hill and around Pinks Hill in Warnford. These would have been developed from the Bronze Age and farmed by small settlements most of which have now disappeared without trace. An Iron Age example was probably located on a farm in Meonstoke and Iron Age and Roman finds were recovered from a field to the east of West Meon. 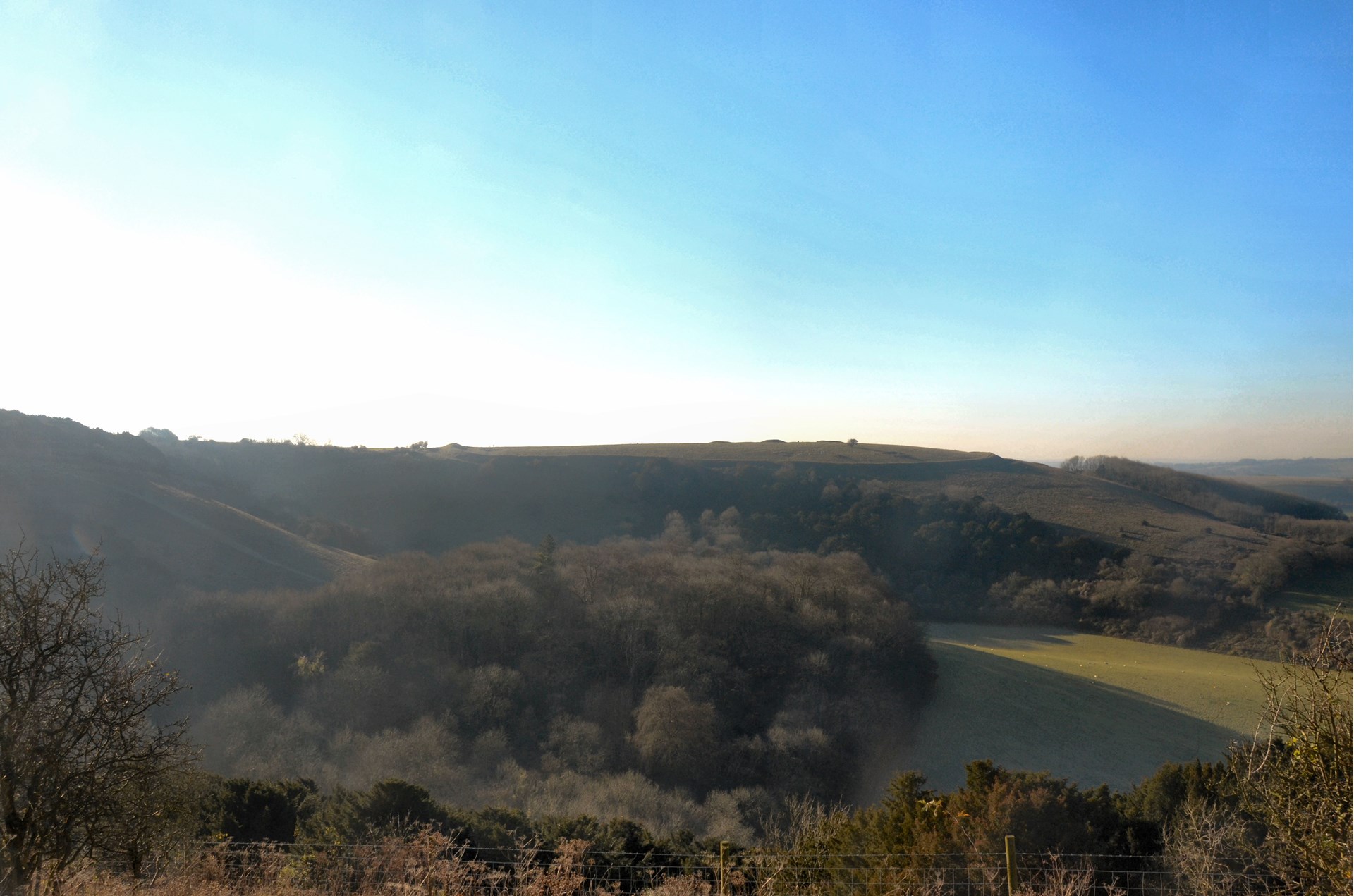 Old Winchester Hill from the North

The Roman invasion of AD43 saw little immediate change to the landscape of the South Downs. The military presence in the area was slight. Ordinary life appears to have changed little for the bulk of the population, with the field systems, roundhouses and farmsteads continuing in use, many of which survived until recently as earthwork sites on the downs.

The process of Romanisation is largely evident further up the social scale, where people acquired those elements of the Roman lifestyle ‘package’ they felt most comfortable with, merging them with elements of their own culture to produce a Romano-British hybrid. This is manifested in the landscape in the appearance of rectangular stone or timber villas.

Fine examples of Roman villas can be found in Lippen Wood in West Meon, Bramdean, Meonstoke, Exton, and Corhampton.

Many of the villa estates appear to have been deliberately located where they could exploit several resource zones (i.e. river valley and downland). The villa estates lay within extensive arable field systems.